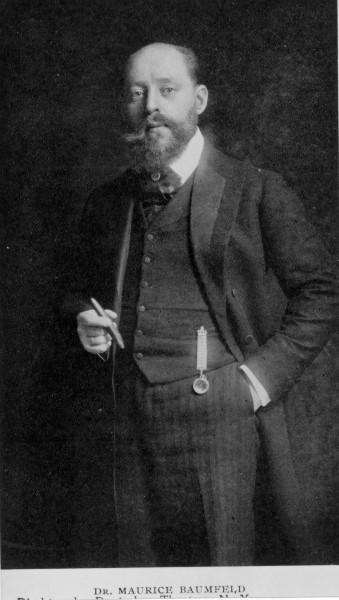 Emigrated to the US in 1900 after brief careers in commerce, railways and journalism.

On their first lonely New York Christmas of 1907 (Year 1907), he knocked on the Mahlers’ door to insist on sharing with them some seasonal jollity in his New York apartment, together with his family.

Maurice Baumfeld (1868-1913) visited Mahler on the day before his departure (06-04-1911, Year 1911) and found Mahler lying on a couch by the open window, covered in blankets, tired and emaciated, his face ravaged by his illness. Little Anna Justine Mahler (Gucki) (1904-1988) was playing in the room. Mahler was still lucid and asked about the latest gossip in the musical life of New York but showed little reaction when he was told. Maurice Baumfeld (1868-1913) had the distinct feeling that Mahler was ‘receding further into the distance with every passing hour’