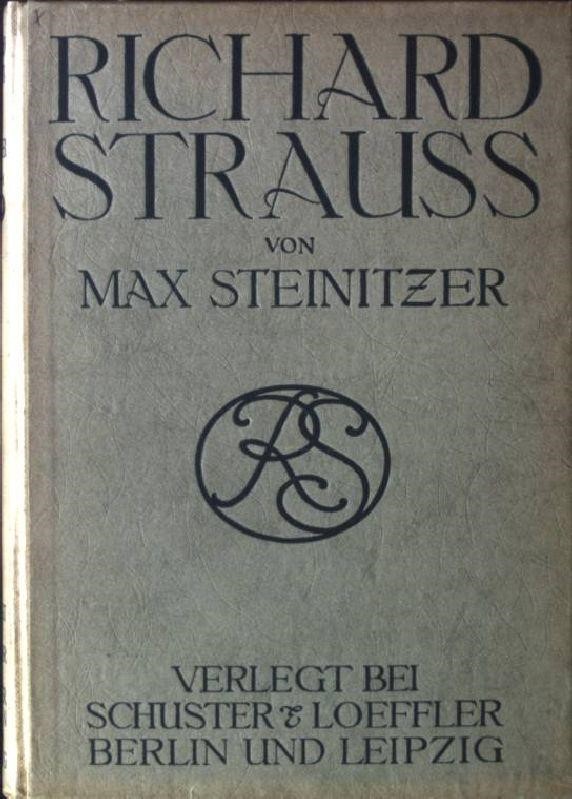 He studied in Munich and received his doctorate there in 1885 “On the psychological effects of musical forms” to Dr. phil. He then worked under frequent change of location as a theater bandmaster (Halle / Saale, Elberfeld), singing teacher (Salzburg, Elberfeld, Munich), conductor smaller music clubs (Langenberg in the Rhineland, Mülheim an der Ruhr) and since 1903 as a teacher at the conservatory in Freiburg im Breisgau.

In 1911 he became opera and concert speaker of the Leipziger Neuesten Nachrichten. Steinitzer wrote numerous music-critical or music-historical works. Like:

When Donald Mitchell examined the autograph score of Blumine at Yale in 1966, his eyes lit on a theme that had been handed down in the Mahler literature in the memoirs of the music critic Max Steinitzer (1864-1936). Steinitzer had described the first six bars of Der Trompeter von Säckingen, and Mitchell noticed the congruence between the surviving theme and the recently unearthed score.

As the Blumine autograph was written on paper of a smaller size than the rest of the manuscript of the First Symphony, he concluded that Mahler must have inserted the entire movement of the original entr’acte, Werners Trompetenlied, unchanged into the score of the symphony. Given the absence of the original score, there is no way to verify this claim. Nevertheless, it is quite certain that the serenade was transformed into Blumine with few if any changes. This also becomes clear when we compare the much smaller scoring of the movement with the forces demanded for the symphony.

In two days, and I must tell you that I am very pleased with it. As you will imagine, my work has not much in common with Scheffel’s affectation and goes much beyond the poet.”The score of Mahler’s Trompeter music that was at Cassel was destroyed when the theater was bombed in 1944, and no others have turned up. We do, however, have an indication of what it contained.

The music critic Max Steinitzer (1864-1936) recalled that “Mahler took with him to Leipzig [in 1886] only this one piece in score, a very appropriate setting of the tableau wherein Werner plays a serenade across the moonlit Rhine toward the castle where Margareta lives.

But Mahler found it too sentimental, became annoyed with it, and made me promise that I would destroy the piano score I had made from it.”Max Steinitzer (1864-1936) nonetheless was able to quote from memory the first six measures of Werners Trompeterlied And when in 1966 Donald Mitchell saw the autograph of the First Symphony in the Osborn Collection at Yale, he found this same theme in the Blumine movement.

After examining the Yale MS and observing that most of the movement is written on a smaller size of paper than was used for the rest of the work, Mitchell concluded that Blumine was “a movement borrowed in its entirety from the incidental music” — in other words, that Werners Trompeterlied became Blumine with little or no revision.

Certainty on this point would require the improbable discovery of a Trompeter score, but it’s at least evident that the serenade is the basis of Blumine. Was, then, the serenade inspired by Johanna Richter? La Grange believes it was not.

Citing Max Steinitzer (1864-1936)’s statement that Mahler subsequently decided the Trompeterlied was too sentimental, he argues, “This proves that the former owner of the ‘Blumine’ score [John C. Perrin] is wrong to claim it was an ‘ardent declaration of love’ for Johanna Richter. Such declarations are to be found in the Lieder eines fahrenden Gesellen and other contemporary poems written for the young singer, rather than in the sugary ‘Blumine,’ which Mahler later eliminated from the First Symphony. . . . ” The logic here is not easy to follow. Mahler may have thought Werners Trompeterlied too sentimental when he spoke to Max Steinitzer (1864-1936), but in 1884, when he wrote La Grange, M:VO, 115. 7 Der Anbruch, April 1920 8 Mitchell, GM:TWY, 219. 9 La Grange, M:VO, 717.