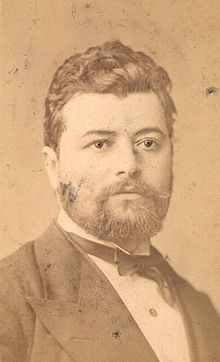 Sandor Erkel was a Hungarian composer, conductor and director of the Hungarian State Opera.

He started his career just as an orchestra musician of the National Theatre in Pest playing tympani; besides he was the dulcimer soloist at the premiere of his father’s famous opera, the Bánk bán.

As one of the most acknowledged Hungarian conductors of his age, he accepted the chairman-conductor position of the Budapest Philharmonic Orchestra in 1875, a post he held until 1900. Johannes Brahms premiered his Piano concerto no. 2. with the Budapest Philharmonic Orchestra on 09-11-1881 in Budapest; the soloist of the concert was the composer, the conductor Sándor Erkel.

He died unexpectedly in Békéscsaba on 14-10-1900. As a composer his oeuvre is relatively small, including orchestral and choral works. His only opera, the Csobánc, was premiered on 13-12-1865.