Oscar Hammerstein I was a businessman, theater impresario and composer in New York City. His passion for opera led him to open several opera houses, and he rekindled opera’s popularity in America. He was the grandfather of lyricist Oscar II Hammerstein (1895-1960). Oscar Hammerstein I was born in Stettin (capital of the province of Pomerania), Kingdom of Prussia (now Szczecin, Poland), to German Jewish parents Abraham and Berthe Hammerstein. He took up the flute, piano, and violin at an early age. His mother died when he was fifteen years old.

During his youth, Hammerstein’s father desired him to continue with his education, wanting him to specialize in topics such as algebra, but Hammerstein desired to pursue music. After Oscar went skating in a park one day, his father found out and whipped him as punishment; this would spur Hammerstein to run away to North America. After selling his violin, Hammerstein ran away to Liverpool, and from there, took a three-month journey to the United States arriving in New York City in 1864.

Hammerstein made ends meet initially by working at a cigar factory on Pearl Street. He worked his way up to become a cigar maker himself, and also founded the U.S Tobacco Journal. Hammerstein would eventually become the owner of at least 80 patents, with most of them being related to the machines he made for the cigar-making process. Hammerstein’s most well-known contribution to the cigar-making process is adding an air-suctioning component to the traditional cigar-making machines, and the component would hold down the tobacco leaves firmly so that they could be cut more cleanly.

The initial machine only sold for $6,000, but later reinventions would boost his machine’s worth to around $200,000. Another invention that Hammerstein created was a more efficient plumbing system for his sink when it had leaked one night. He also moonlighted as a theater manager in the downtown German theaters. He became wealthy industrializing cigar manufacturing, and his tobacco fortune provided the money he used to pursue his theater interests.

Hammerstein built his first theater, the Harlem Opera House, on 125th Street in 1889, along with 50 housing developments. His second theater, the Columbus Theatre, was built in 1890 on the same street, featuring light theatrical productions. His third theater was the first Manhattan Opera House, built in 1893 on 34th Street. This failed as an opera house and was used, in partnership with Koster and Bial, to present variety shows.

Hammerstein was displeased with the partnership to the point that it fell into bitterness: “When I get through with you, everybody will forget there ever was a Koster and Bial. I will build a house the likes of which has never been seen in the whole world”. He opened a fourth venue, the Olympia Theatre, on Longacre Square, where he presented a comic opera that he wrote himself, Santa Maria (1896). 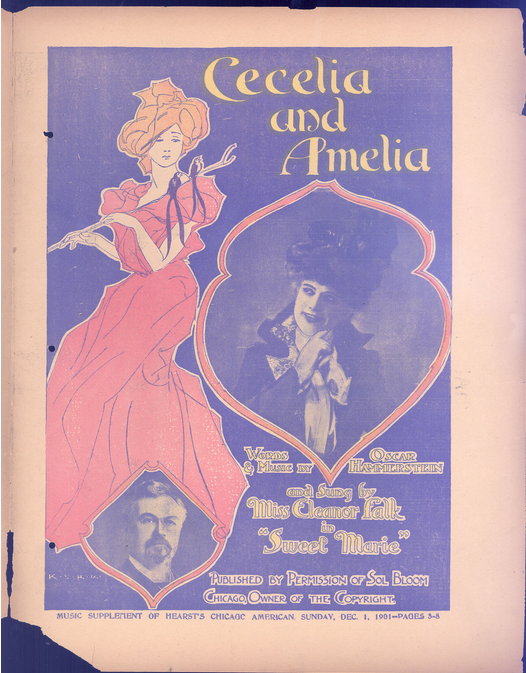 While it was positively received by the New York Times, Hammerstein’s personal experience was less than peaceful, with the production being plagued by monetary issues with the cast and stage set. In the end, Hammerstein had profited only one-tenth of the costs that were put into the Santa Maria production. Nine years later, Longacre Square was renamed Times Square, and the area had become, through his efforts, a thriving theater district.

Hammerstein built three more theaters there, the Victoria Theatre (1898), which turned to vaudeville presentation in 1904 and was managed by his son, Willie Hammerstein; the Theatre Republic was built in 1900 and leased to eccentric producer David Belasco, in 1901, and the Lew Fields Theatre for Lew Fields (half of the Vaudeville team Weber and Fields, and the father of lyricist Dorothy Fields), in 1904. He wrote a musical called Punch, Judy & Co. in 1903. Hammerstein also opened Hammerstein’s Paradise Roof Garden above the Victoria and Republic theatres. 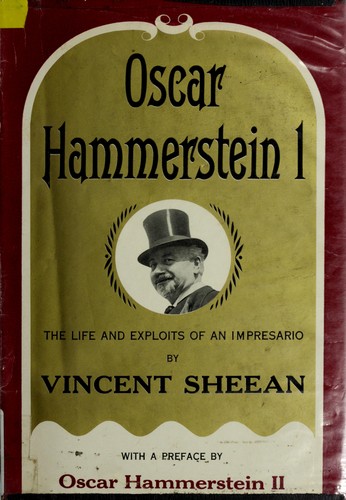 In 1906, Hammerstein, dissatisfied with the Metropolitan Opera’s productions, opened an eighth theater, his second Manhattan Opera House, to directly (and successfully) compete with it. He opened the Philadelphia Opera House in 1908, which, however, he sold early in 1910. He produced contemporary operas and presented the American premieres of Louise, Pelleas et Melisande, Elektra, Le Jongleur de Notre Dame, Thaïs, and Salome, as well as the American debuts of Mary Garden and Luisa Tetrazzini. Since the star soprano Nellie Melba was disenchanted with the Metropolitan, she deserted it for Hammerstein’s company, rescuing it financially with a successful season.

He also produced the successful Victor Herbert operetta Naughty Marietta in 1910. Hammerstein became famous during his opera years for putting noticeably large budgets out for his productions, Santa Maria being one example. More often than not, he would fall into financial trouble within a short period of time. The New York Times conducted an interview with Hammerstein, and when the interviewer asked him about his financial habits, Hammerstein responded:

Financially, I never undertake anything without plenty of ammunition. I am never afraid of being ambushed in this account. I decided that my preliminary contracts should be drawn up provisionally upon my success in securing the great stars. I always contemplated an honorable retreat.

In the end, Hammerstein’s high-quality productions were ultimately too expensive to sustain, and by his fourth opera season, he was going bankrupt. The costs at the Metropolitan, too, were skyrocketing, as the Metropolitan spent more and more in order to effectively compete. Hammerstein’s son Arthur negotiated a payment of $1.2 million from the Metropolitan in exchange for an agreement not to produce grand opera in the United States for 10 years. 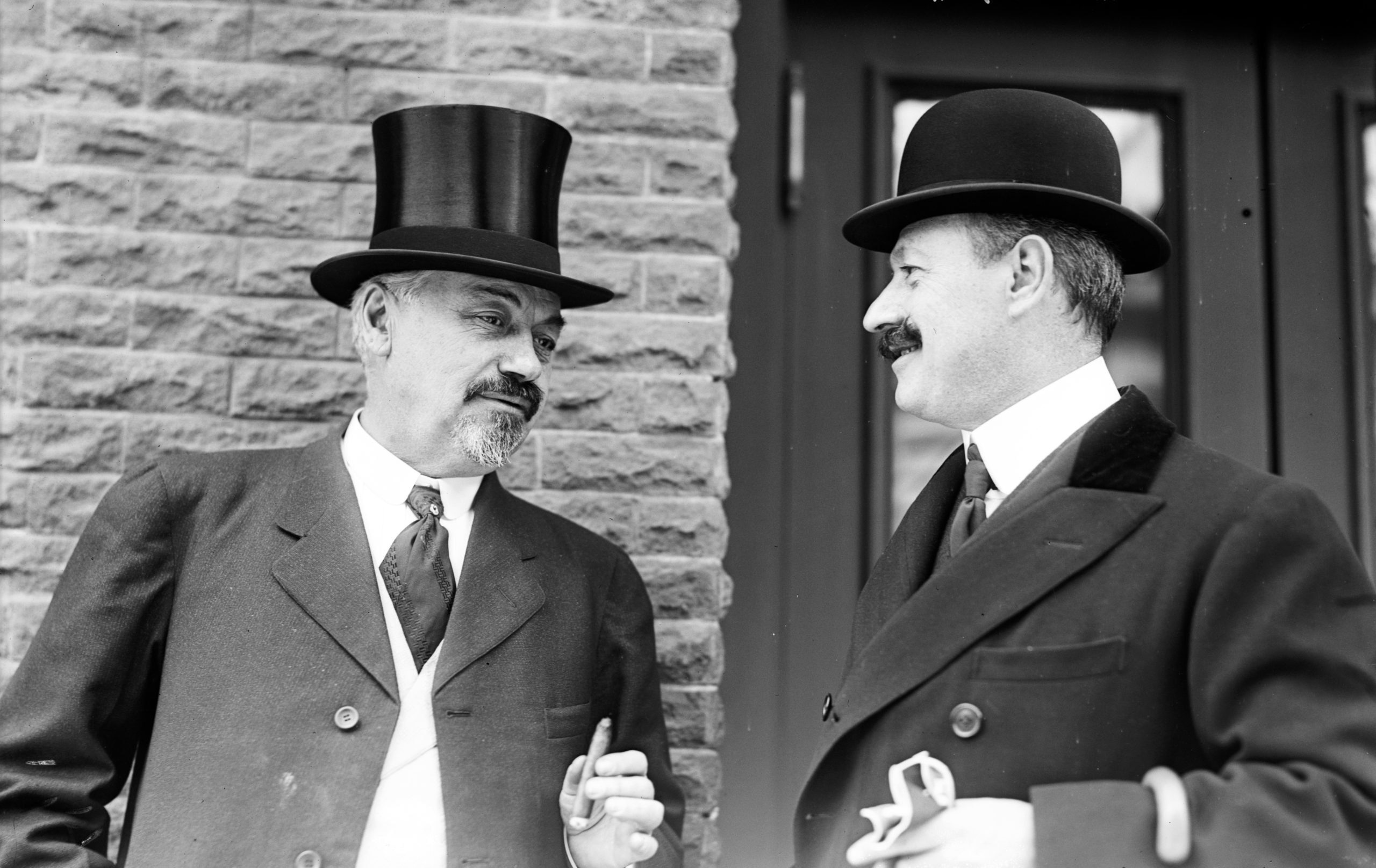 With this money, Hammerstein built his tenth theater, the London Opera House, in London, where he again entered competition with an established opera house, Covent Garden’s Royal Opera House. He had run through his money in two years and thereupon returned to America. During a trip to Paris, a special cable was sent to him out of curiosity asking whether he wanted to quit opera in New York, given that during his 1909-1910 opera seasons in New York and Philadelphia, Hammerstein had failed in successfully maintaining audiences in his two venues in each city. He simply responded by saying, “[Opera in New York is] what I’m here for. I can’t say anymore.”

With money obtained selling the sole booking rights to the Victoria Theatre, he built his eleventh and final theatre, the Lexington Opera House. Unable to present opera there, he opened it as a movie theatre, selling it shortly thereafter. On April 28, 1910, Hammerstein officially ended producing opera, opting to solely focus on dramatic productions. All of his contracts and buildings of operation were turned over to the Metropolitan Opera Company.

At many points in his later career, Hammerstein fell into numerous legal troubles, most of them in regards to his opera houses. Interestingly enough, he went through many of them with an air of pride. One of his more infamous accusations was from a Frances Lee, an opera singer, who accused him of preventing her from singing in the Manhattan Opera House after one performance. Hammerstein was found not guilty and settled his possible payment for up to $35. Hammerstein had given his two daughters, Stella and Rose Hammerstein, $200 a week for financial support after the death of his first wife.

The payments were given to them by the Equitable Trust Company securely in exchange for stock shares in Hammerstein’s Victoria Theatre. In 1912, Hammerstein requested his stocks back from the company and chose to no longer pay for his daughters. Stella and Rose sought to fight against their father, who believed that they could support themselves on their own. Infamously, he compared paying his daughters to “the eccentricities and actions of the late lamented King Lear.”

Hammerstein contracted kidney problems and paralysis, eventually permanently falling into a coma. He died in 1919 in Lenox Hill Hospital at Park Avenue and 77th Street in Manhattan. His contractual ban on presenting opera was due to expire in 1920; at his death he was busy planning his return to the opera stage. The Manhattan Opera House was bid for $145,000 by Hammerstein’s two daughters.

They would also sue Hammerstein’s third wife, Emma Swift Hammerstein, over money and ownership of the building. Emma Hammerstein would go to court claiming ownership through Hammerstein Opera Company stock, but the stocks were found to be null and void by the judge. The Manhattan Opera House on 34th Street in New York City was renamed the “Hammerstein Ballroom” at the Manhattan Center Studios in his honor.