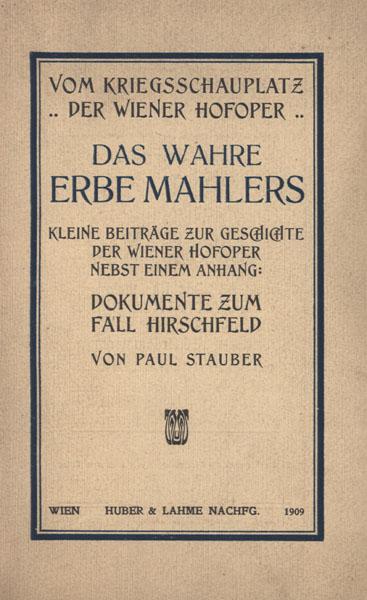 The music critic of the Illustrierte Wiener Extrablatt was partly responsible for disturbing the world premiere of Arnold Schoenberg’s 2nd String Quartet.

Paul Stauber, part-time music critic and full-time detractor of Arnold Schoenberg (1874-1951)’s music, who was one of the riot-leaders at the premiere, speculated at Schoenberg’s insincere motives: “The effect that Schoenberg intends – to bluff the audience, was also achieved yesterday.”Stauber’s comment hearkens back to the cries of “Wir lassen uns nicht narren!” from the premiere, of which he was undoubtedly a part. “Theaterzeitung,” Illustrirtes Wiener Extrablatt, 26-02-1909.

Letter: One letter from Stauber to Schenker survives, written in Stauber’s capacity as Secretary of the Vereinigung Wiener Musikreferenten (OJ 14/44, 30-09-1910), co-signed with Theodor Antropp. At the suggestion of Dr. Robert Hirschfeld, and at the instigation of our colleagues, we take pleasure in extending to you the invitation to give a lecture series on the construction of Beethoven’s Ninth Symphony under the auspices of our Association. So that we can make further arrangements, we would ask you, if your time permits, kindly to join us on Monday 03-10-1910 at 6 p.m. in the Caffee Imperial. In any case, we should be grateful for a communication from you (Stauber, [Vienna] IX, Währingerstraße 31), and we remain, etc.

The next performance for which multiple reviews exist is from 12-10-1910 when Verklärte Nacht, Op. 4, String Quartet No. 1, Op. 7 and the Second String Quartet, Op. 10 were performed at the Heller art salon where Schoenberg’s paintings were also on display. Stauber was also in attendance at this performance and he wrote a scathing and sarcastic review in the Illustriertes Wiener Extrablatt. In the article Stauber refers to Schoenberg’s “paintings” (with condescending quotation marks) as the next work from the “master of cacophony,” while offering the back-handed compliment that, “this music goes wonderfully with these pictures.” Paul Stauber], „Schoenberg-Abend,“ Illustrirtes Wiener Extrablatt, 13-10-1910.

On 24-04-1911, in Vienna, at the cult concert of Schoenberg’s students, representatives of the later famous Second Vienna School, pianist Etta Werndorf performed the Sonata, which was anthological and essential to the development of European piano music. Paul Stauber, theconservative music critic, wrote on that occasion: «The Anti-Art and Culture Society has chosen Mr. Arnold Schoenberg, the director of the Vienna Cacophony, for its patron. The joke, however, did not last long; and last Monday’s artistic monster could have been met only with most exasperated protests».