Sara Cahier was an American-born mezzo-soprano or contralto singer in opera and lieder, who sang mainly in Europe, later acquiring Swedish citizenship. She was associated with Gustav Mahler, and was one the soloists in the posthumous premiere of his Das Lied von der Erde in 1911. She also sang at the Metropolitan Opera, New York, and was a teacher at the Curtis Institute of Music in Philadelphia. Her students included Marian Anderson.

Born as Sara Jane Layton Walker in Nashville, Tennessee. She studied in Indianapolis, and in Paris under Jean de Reszke, and made her debut as Orpheus in Orpheus and Eurydice in Nice in 1904. Other teachers included Gustav Walter, Victor Capoul and Amalie Joachim.

Her first husband was Morris Black. In 1905 she married a Swede, the impresario Charles Cahier,after which she was generally billed as “Madame Charles Cahier”, or “Sara Charles-Cahier”.

She was active in Vienna, joining the Hofoper in 1907, and Munich, often singing under Gustav Mahler’s directorship in roles such as Amneris, Carmen, Delilah, Fidès, Ortrud, and Santuzza. Cahier and her fellow American the tenor William Miller were chosen by Bruno Walter to premiere, posthumously, Mahler’s Das Lied von der Erde in Munich in November 1911. She also sang in the New York premiere of the work in 1922, with tenor Orville Harrold, under conductor Artur Bodanzky. She sang in France, Italy, England and Germany. Other noted conductors under whom she sang included Edvard Grieg and Richard Strauss. 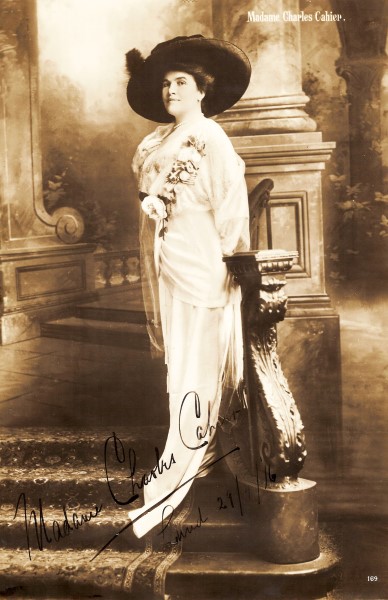 She sang at the Metropolitan Opera in New York from 1912 to 1914, making her debut there as Azucena in Il trovatore. Other appearances there included Fricka in Die Walküre, alongside Olive Fremstad and Margaret Matzenauer.

Cahier enjoyed great success in Stockholm from 1915 to 1917, during which time she acquired Swedish citizenship. After retirement, she became a teacher and vocal coach, at the Curtis Institute of Music in Philadelphia. Her students, there and elsewhere, included Marian Anderson, Göta Ljungberg and Rosette Anday. It was on her advice that Lauritz Melchior changed from baritone to heldentenor.

Her recordings were few, but include:

After her debut in 1904 she joined the Hofoper in 1907 and remained until 1911. Under Gustav Mahler, she sang Amneris, Carmen, Dalilah, Fidès, Ortrud, and Santuzza.

In 1906 she was engaged by Gustav Mahler at the Vienna Hofoper where she became a favorite opera singer for six seasons. During the seasons 1912 and 1913 she also appeared at the Met. Her most famous role was Carmen. Her concert work, however, was more significant. It was Bruno Walter who chose her in 1911 for the posthumous premiere of Gustav Mahler’s Das Lied von der Erde. 1911 Concert Munich 20-11-1911 – Das Lied von der Erde (Premiere, posthumous).

Among her later pupils were Marian Anderson, Göta Ljüngberg, and Rosette Anday.