Das Lied von der Erde (The Song of the Earth) is a composition for two voices and orchestra by Gustav Mahler (1860-1911). Composed between Year 1908 and Year 1909 following the most painful period in Mahler’s life (Year 1907). The songs address themes such as Living, Parting and Salvation.

Mahler had already included movements for voice and orchestra in his Symphony No. 2, No. 3, No. 4 and No. 8. Das Lied von der Erde is the first work giving a complete integration of song cycle and symphony. The form was afterwards imitated by other composers, notably by Dmitri Shostakovich (1906-1975) and Alexander von Zemlinsky (1871-1942). It has been termed a ‘song-symphony’. A hybrid of the two forms that had occupied most of Mahler’s creative life.

Das Lied von der Erde is scored for a large orchestra. Mahler deploys these resources with great restraint: only in the first, fourth and sixth songs does the entire orchestra play at once, and in some places the texture almost resembles chamber music, with only a few instruments playing.

Mahler’s habit was to subject the orchestration of every new orchestral work to detailed revision over several years; though the musical material itself was hardly ever changed, the complex instrumental ‘clothing’ would be altered and refined in the light of experience gained in performance.

In the case of Das Lied von der Erde, however, this process could not occur as the work’s publication and first performance occurred posthumously.

‘With one stroke, I have lost everything, I have gained in terms of who I thought I was, and have to learn my first steps again, like a newborn’ Gustav Mahler wrote to his friend Bruno Walter (1876-1962).

Gustav Mahler got a copy of the book ‘Die Chinesische Flote’ (The Chinese Flute), written by Hans Bethge (1876-1946), from his friend Theobald Pollak (1855-1912). The Chinese Flute was published in 10-1907 (Year 1907) in Leipzig and is a volume of 83 poems of ancient Chinese poetry rendered (‘nachdichtungen’, paraphrased) from Chinese into German. Mahler was very taken by the vision of earthly beauty and transience expressed in these verses and had first put it aside for future use.

Hans Bethge (1876-1946) used translations of the original Chinese poetry. Texts now identified as being likely sources used by Bethge include:

The four Chinese poets are from the Tang-dynasty: 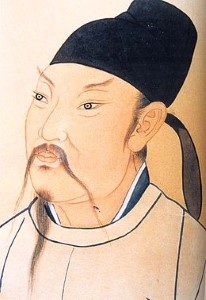 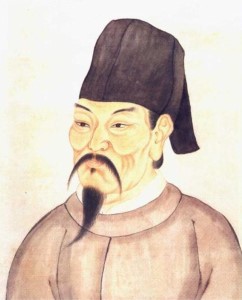 The Chinese Flute is full of the poetic images that Mahler used recurrently throughout his life, some of which now had acquired, it would seem, new meaning for him. One of the things that no doubt ingratiated the verses to him in particular was the Oriental metaphor for death as journeying ‘to the mountains’.

Not only did Mahler love the mountains but he had always fantasized himself as a wanderer of the earth. Sometimes he was the Wandering Jew himself: ‘I am thrice homelesss – as a Bohemian among Austrians, as an Austrian among Germans, and as a Jew throughout the world’.

The poems of The Chinese Flute came back to Mahlers mind in Year 1908 as their infinite melancholy answered his own. Mahler chose seven of the poems to set to music in six songs as Das Lied von der Erde.

The six songs are based on poems by these Chinese poets: 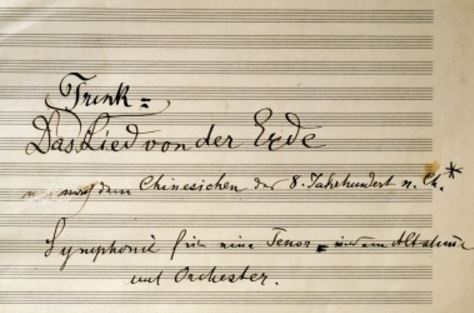 Curse of the Ninth

Mahler was aware of the so-called ‘Curse of the Ninth’, a superstition arising from the fact that no major composer since Ludwig van Beethoven (1770-1827) had successfully completed more than nine symphonies before dying.

His next symphony, written for purely instrumental forces, was numbered Symphony No. 10. That was indeed the last symphony he fully completed, because only the first movement of this work had been fully orchestrated at the time of his death. 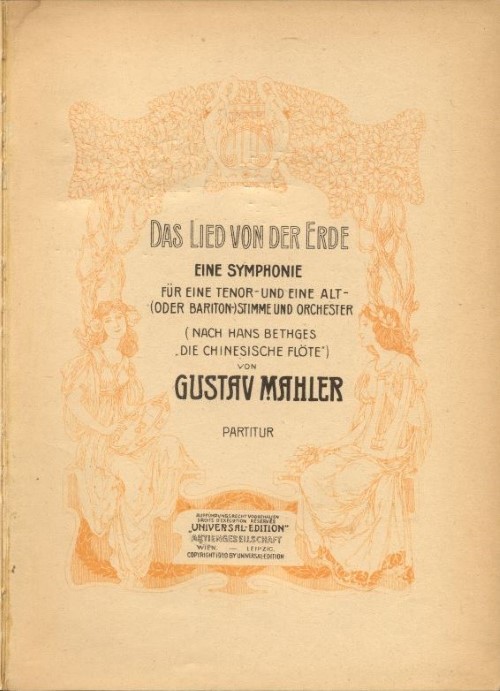