There is some evidence that Mahler’s feelings were first fired by Naumann-Gungl, but she was already married and the mother of two children and, indeed, considerably older than Mahler. In short, she was less attainable. Mahler fell in love with Johanna Richter (1858-1943). Her father Josef Gungl travelled in Germany, Russia and North America, where he mainly directed operettas and marches. During a guest appearance in New York she was born.

She was later promoted by the famous conductor Hans von Bulow (1830-1894) and trained by educators Schmidt in Munich. 1868 she made her debut in Munich, but concluded in another two years’ study at Richard Levy in Vienna.

From their repertoire are emphasized: the Leonore in “Fidelio”, the Rezia in “Oberon” by Weber, Donna Anna in “Don Giovanni”, the Rachel in “La Juive” by Halévy, the Countess in “The Marriage of Figaro” Pamina in “The Magic Flute”, the Aida, Carmen and Isolde in “Tristan”. As a concert soprano, she had a great career. 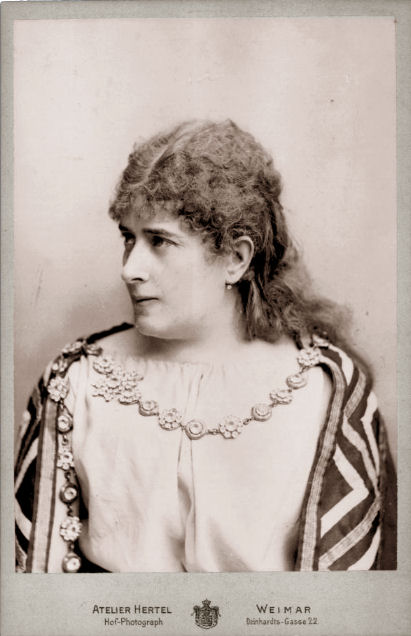 Her father, Joseph Gungl, correct: Josef Gung’l (01-12-1809 – 01-02-1889), was an Austrian composer, bandmaster, and conductor. He was born in Schambeck, Austria (now Zsámbék, Hungary). After working as a school-teacher in Buda, and learning the elements of music from the school-choirmaster, he became first oboist at Graz, and, at twenty-five, bandmaster of the 4th Regiment of Austrian Artillery. His first composition, a Hungarian march, written in 1836, attracted some notice, and in 1843 he was able to establish an orchestra in Berlin. With this band he travelled far, even to the United States in 1848-1849.

Mendelssohn’s complete Midsummer Night’s Dream music is said to have been first played by Gungl’s orchestra. In 1853 he became bandmaster to the 23rd Infantry Regiment at Brno, but in 1864 he moved to Munich, and in 1876 at Frankfurt, after having conducted with great success a series of promenade concerts at the Covent Garden in London in 1873. From Frankfurt, Gungl went to Weimar to live with his daughter, a well-known German opera singer, and died there.