William James Henderson was an American musical critic and scholar, born at Newark, New Jersey. He graduated from Princeton in 1876 and immediately began work as a journalist, later as a reporter, then as the musical critic of The New York Times, and in 1902 of The New York Sun. He wrote perceptive press reviews of the performances of the Metropolitan Opera’s star singers which remain valuable for today’s scholars.

Henderson’s perspicacity as a musical reviewer and evaluator was recognised when he was appointed lecturer on musical history in the New York College of Music. He was also elected a member of the National Institute of Arts and Letters in 1914.

Three days after the death of his 40-years longtime friend and fellow newspaper music critic, Richard Aldrich (1863-1937), he committed suicide with a .38-calibre revolver in his West-Side Manhattan hotel room. 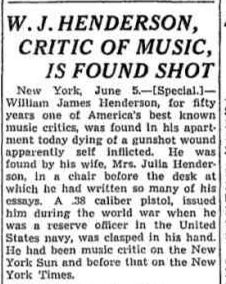