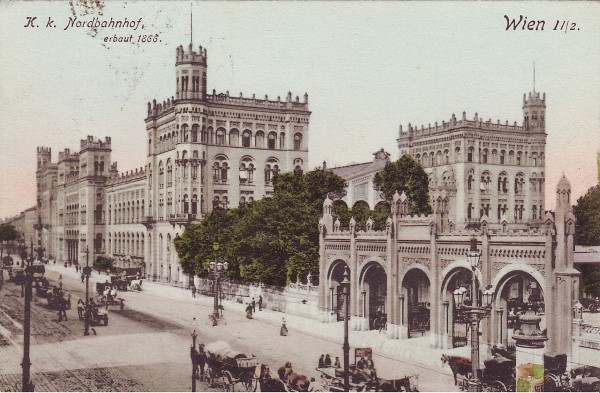 Wien Praterstern (German for Vienna Praterstern) is one of Vienna’s main railway stations, being used by 35,000 people daily. It is located on the roundabout Praterstern in Leopoldstadt, in the north of the city. Vienna’s two most recognisable structures, the Wiener Riesenrad (Ferris wheel) and the Stephansdom (cathedral) are both visible from the platforms.

The first station was built during the construction of the North railway, it was opened on 6 January 1838 as k.k. Nordbahnhof (Imperial and Royal North railway station) in the style in which the names of virtually all public works were rendered at the time. Due to rapidly rising passenger numbers, the station became too small very quickly and had to be rebuilt. Between 1858 and 1865, the station building in the vicinity of Praterstern was built.

Like all other stations in Vienna at this time, the Northern Station was planned to be an exhibition building. Several architects were assigned to planning the building, interior decorating was done by sculptors and fresco painters. The station was opened on 15 November 1865.

In the days of Austria-Hungary, the station was one of the most significant stations in Europe and Vienna’s primary railway stations, connecting Vienna with Brno, Prague and Warsaw. For many immigrants, it was the door to Vienna. The train traffic to Germany and its seaports passed through the nearby Nordwestbahnhof (Northwest railway station), which was opened in 1872.

During World War II, the station was severely damaged by bombs and subsequently fell into disuse; it was finally demolished in 1965. The new building was constructed directly at Praterstern for logistical reasons and was opened on 1 June 1959 as Bahnhof Praterstern. On 1 September 1975, it was renamed Wien Nord.