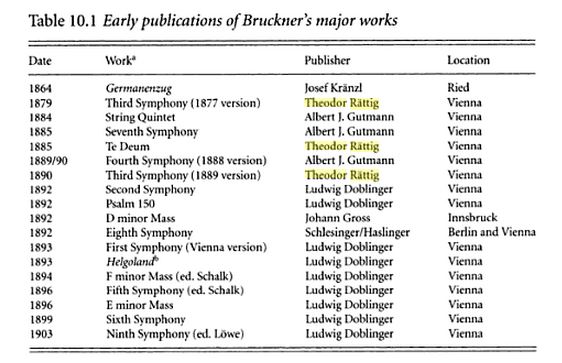 Theodor Rättig started his firm in Vienna in 1878, and led a quiet existence publishing mainly works for male chorus. However, there was one exception, Bruckner’s 3rd Symphony. Bearing in mind the length of Bruckner’s symphonies, and the composer’s tendency to make several revisions even after first publication, one symphony by this composer provided the publisher with as much business as five by any other composer. Later, a branch of Theodor Rättig opened in Leipzig in 1897. Bought by Lienau ca. 1910.

Schoenberg, insisting on the legitimate interest that attaches to every aspect of the life and person of a great man, once said he would have liked to see how Mahler tied his tie. It is in something of that spirit that one approaches the earliest Mahler work to have come down to us, the single movement for piano quartet in A minor (apparently the first movement of a projected four-movement opus), which he wrote while a student at the Vienna Conservatory, probably late in 1876 when he was sixteen years old.

We know of other works dating from this period or even earlier—a quartet for two violins, viola and piano; a prize-winning movement for piano quintet; the legendary four “youth symphonies”—by reputation only; the music is lost.

The one work we do have, however, was recalled by Mahler (in a conversation with Nathalie Bauer-Lechner in 1893) to have been the best of the lot. It “excited a good deal of enthusiasm”, and it was performed under prestigious circumstances: the chamber music soirées held at the home of Theodor Billroth, an eminent Viennese surgeon and amateur violinist, who was a close friend and musical confidant of Hanslick and Brahms.

The manuscript bears the stamp of the music publisher Theodor Rattig, who issued Mahler’s piano-duet arrangement of Bruckner’s Third Symphony sometime between 1878 and 1886 (this was Mahler’s first publication). Rattig did not print the quartet though, and as Mahler put it in 1893 “in the end I sent it to Moscow for a competition and it got lost”. But in fact it was found among the effects of his widow Alma after her death in 1964, in a folder labelled “early compositions”.

It was performed (in an edition prepared by Dika Newlin) at a concert in New York that year, but was not published until 1973, when the Hamburg firm of Sikorski brought it out in an edition by Peter Ruzicka. Despite the encouraging attention this single movement was shown, it is likely that it (plus the 24-bar sketch for a scherzo in G minor found with it in Alma Mahler’s folder) was all Mahler ever completed of the quartet. During his Conservatory years he rarely if ever finished anything.

As he confessed to Bauer-Lechner: “It was not only that I was impatient to begin a new piece, but rather that before I finished a work it no longer challenged or interested me, as I had gone beyond it. But who at the time could know whether my trouble was not a lack of ability or of the power to persevere?”