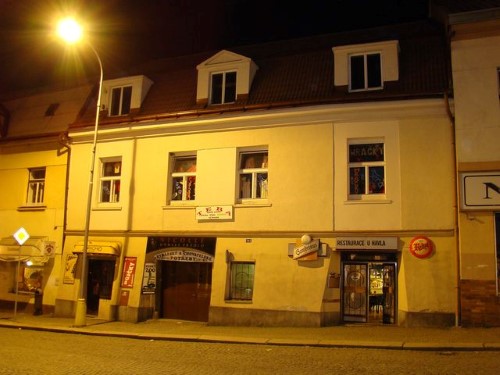 The house of the Freischberger family. Uncle Josef Freischberger and aunt Barbara Freischberger-Mahler. Barbara was a sister of Gustav Mahlers mother Marie Mahler-Herrmann (1837-1889).

At the end of the summer of 1876, Mahler invited Rudolf Krzyzanowski (1859-1911) to his home, to take part in an Jihlava charity concert. He took him to Ledec nad Sazavou to visit one of his aunts, Frau Freischberger who, according to the Czech conductor Joseph Stransky (1872-1936), was one of his mother’s sisters. According to him, this tall woman had gray eyes that reflected her innate kindness, and she was treated with respect in the little town, where it was considered an honor to be invited to her home. One day the young Stransky was taken to see her by relations, and she at once told him that her young nephew Gustav Mahler, who was already the pride of the family, was there with a friend of his, and that they would soon be back from a walk.

The two young people did in fact soon return, deep in animated conversation. At the tea table Mahler finally noticed the new visitor, ruffled the young Stransky’s hair, and demanded his name. He then asked him if he was the son of the teacher for whom he had written a “Eulogy in memory of the Empress Maria Anna.” Mahler took an enthusiastic part in the general conversation, but the child noticed that his friend remained gloomy and silent. Mahler’s aunt finally asked Krzyzanowski (for it was he) why he said nothing, and it was Mahler who replied with a laugh. “You must take him as he is. He will always be a bulldog.” Josef Stransky later succeeded Gustav Mahler as the conductor of the New York Philharmonic Orchestra.