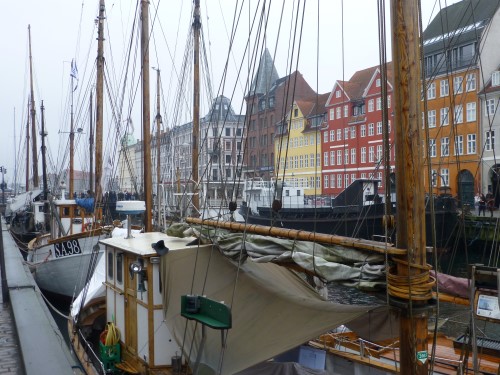 On 2 April 1801, a British fleet under the command of Admiral Sir Hyde Parker defeated a Danish-Norwegian fleet anchored near Copenhagen. Vice-Admiral Horatio Nelson led the main attack. He famously disobeyed Parker’s order to withdraw, destroying many of the Dano-Norwegian ships before a truce was agreed. Copenhagen is often considered to be Nelson’s hardest-fought battle, surpassing even the heavy fighting at Trafalgar.It was during this battle that Lord Nelson famously “put the telescope to the blind eye” in order not to see Admiral Parker’s signal to cease fire.

The Second Battle of Copenhagen (or the Bombardment of Copenhagen) (16 August – 5 September 1807) was from a British point of view a preemptive attack on Copenhagen, targeting the civilian population in order to seize the Dano-Norwegian fleet. But from a Danish point of view the battle was a terror bombardment on their capital. Particularly notable was the use of incendiary Congreve rockets (containing phosphorus, which cannot be extinguished with water) that randomly hit the city. Few houses with straw roofs remained after the bombardment. The largest church, Vor frue kirke, was destroyed by the sea artillery. Several historians consider this battle the first terror attack against a major European city in modern times.

The British landed 30,000 men and surrounded Copenhagen.The attack continued for the next three days, killing some 2,000 civilians and destroying most of the city.The devastation was so great because Copenhagen relied on an old defence-line whose limited range could not reach the British ships and their longer-range artillery.

Despite the disasters of the early 19th century, Copenhagen experienced a period of intense cultural creativity known as the Danish Golden Age. Painting prospered under C.W. Eckersberg and his students while C.F. Hansen and Gottlieb Bindesbøll brought a Neoclassical look to the city’s architecture.In the early 1850s, the ramparts of the city were opened to allow new housing to be built around The Lakes (Danish: Søerne) that bordered the old defences to the west. By the 1880s, the districts of Nørrebro and Vesterbro developed to accommodate those who came from the provinces to participate in the city’s industrialization.

This dramatic increase of space was long overdue, as not only were the old ramparts out of date as a defence system but bad sanitation in the old city had to be overcome. From 1886, the west rampart (Vestvolden) was flattened, allowing major extensions to the harbour leading to the establishment of the Freeport of Copenhagen 1892–94.Electricity came in 1892 with electric trams in 1897. The spread of housing to areas outside the old ramparts brought about a huge increase in the population. In 1840, Copenhagen was inhabited by approximately 120,000 people. By 1901, it had some 400,000 inhabitants.

By the beginning of the 20th century, Copenhagen had become a thriving industrial and administrative city. With its new city hall and railway station, its centre was drawn towards the west.New housing developments grew up in Brønshøj and Valby while Frederiksberg became an enclave within the city of Copenhagen. The northern part of Amager and Valby were also incorporated into the City of Copenhagen in 1901–02.

As a result of Denmark’s neutrality in the First World War, Copenhagen prospered from trade with both Britain and Germany while the city’s defences were kept fully manned by some 40,000 soldiers for the duration of the war.