Gewandhaus is a concert hall in Leipzig, Germany, the home of the Leipzig Gewandhaus Orchestra. Today’s hall is the third to bear this name; like the second, it is noted for its fine acoustics.

The second Gewandhaus was designed by Martin Gropius. It opened on 11-12-1884, after two-and-a-half years’ construction and had a main concert hall and a chamber music hall. The main hall (Großer Saal) – highly praised for both its architecture and its acoustic – seated 1,500 concertgoers; the chamber music hall accommodated 500 people. The Neues Gewandhaus played host to many of the world’s most eminent musicians, such as Anton Bruckner (1824-1896), Igor Stravinsky (1882-1971) and Yehudi Menuhin.

The Gewandhauskapellmeister Arthur Nikisch (1855-1922), Wilhelm Furtwängler and Bruno Walter (1876-1962) made their exceptional contributions to the evolution of the Orchestra here during their respective tenures. Leipzig Gewandhaus Orchestra (LGO). The hall was even to witness the likes of Johannes Brahms, Richard Strauss and Peter Tchaikovsky conducting performances of their own works.

In 1892, a memorial to Felix Mendelssohn Bartholdy was unveiled in front of the Neues Gewandhaus. In 1936, however, the Nazi regime claimed this monument to a “full-blooded Jew” would provoke “public offence” and removed it. Three years earlier, immediately after coming to power, the regime imposed an occupational ban on Bruno Walter, forbidding him to conduct: he left Leipzig, never to return. 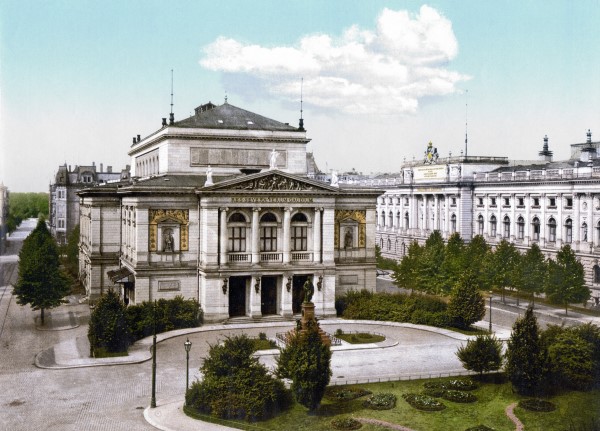 After suffering a direct hit in the bombing of February 1944, the Gewandhaus’s interior burnt out entirely. As early as 1947, a new memorial to Mendelssohn, cast by Walter Arnold, was erected in front of the ruin of the Gewandhaus. The monument now stands only a few metres away from its original location, on the Mendelssohn-Ufer, the bank of the renewed Pleiße mill stream. Despite a long-running campaign for its reconstruction, the remaining shell was finally demolished in 1968.

The third Gewandhaus on Augustusplatz opened on 8 October 1981, two hundred years after the Leipzig Gewandhaus Orchestra moved into the original hall.