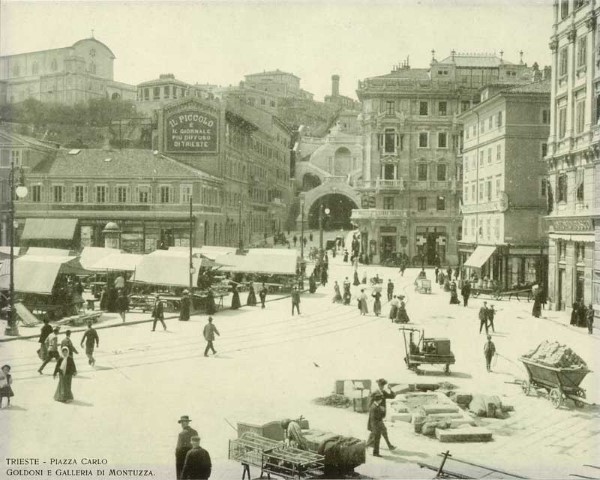 Trieste is a city and seaport in northeastern Italy. It is situated towards the end of a narrow strip of Italian territory lying between the Adriatic Sea and Slovenia, which lies almost immediately south and east of the city. It is also located near Croatia some further 30 kilometres (19 mi) south. Trieste is located at the head of the Gulf of Trieste and throughout history it has been influenced by its location at the crossroads of Latin, Slavic, and Germanic cultures.

The city was briefly occupied by troops of the French Empire during the Napoleonic Wars on several occasions, in 1797, 1805 and 1809. From 1809 to 1813, Trieste was annexed into Illyrian Provinces, interrupting its status of free port and losing its autonomy.

The municipal autonomy was not restored after the return of the city to the Austrian Empire in 1813. Following the Napoleonic Wars, Trieste continued to prosper as the Free Imperial City of Trieste (German: Reichsunmittelbare Stadt Triest), a status that granted economic freedom, but limited its political self-government.

The city’s role as Austria’s main trading port and shipbuilding centre was later emphasized with the foundation of the merchant shipping line Austrian Lloyd in 1836, whose headquarters stood at the corner of the Piazza Grande and Sanità (today’s Piazza Unità d’Italia). By 1913 Austrian Lloyd had a fleet of 62 ships comprising a total of 236,000 tons.

With the introduction of the constitutionalism in the Austrian Empire in 1860, the municipal autonomy of the city was restored, with Trieste becoming capital of the Austrian Littoral crown land (German: Österreichisches Küstenland).

In the later part of the 19th century, Pope Leo XIII considered moving his residence to Trieste or Salzburg because of what he considered a hostile anti-Catholic climate in Italy following the 1870 Capture of Rome by the newly established Kingdom of Italy. However, the Austrian monarch, Franz Josef I, rejected the idea. The modern Austro-Hungarian Navy used Trieste as a base and for shipbuilding. The construction of the first major trunk railway in the Empire, the Vienna-Trieste Austrian Southern Railway, was completed in 1857, a valuable asset for trade and the supply of coal.

In 1882 an Irredentist activist, Guglielmo Oberdan, attempted to assassinate Emperor Franz Joseph, who was visiting Trieste. Oberdan was caught, convicted, and executed. He was regarded as a martyr by radical Irredentists, but as a cowardly villain by the supporters of the Austro-Hungarian monarchy. Franz Joseph, who reigned another thirty-five years, never visited Trieste again.

Trieste has a lively cultural scene with various theatres. Among these are the Opera Teatro Lirico Giuseppe Verdi, Politeama Rossetti, the Teatro La Contrada, the Slovene theatre in Trieste (Slovensko stalno gledališce, since 1902), Teatro Miela, and a several smaller ones.