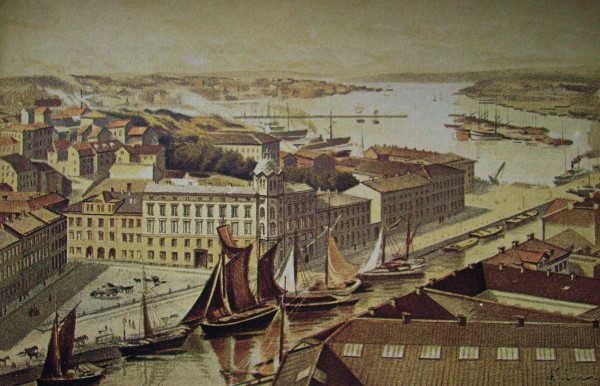 Gothenburg is the second-largest city in Sweden and the fifth-largest in the Nordic countries. Situated by the Kattegat, on the west coast of Sweden, the city proper has a population of 543,005, with 549,839 in the urban area and 973,261 inhabitants in the metropolitan area.

In the early modern period, the configuration of Sweden’s borders made Gothenburg strategically critical as the only Swedish gateway to the North Sea and Atlantic, situated on the west coast in a very narrow strip of Swedish territory between Danish Halland in the south and Norwegian Bohuslän in the north. After several failed attempts, Gothenburg was successfully founded in 1621 by King Gustavus Adolphus (Gustaf II Adolf).

The site of the first church built in Gothenburg, subsequently destroyed by Danish invaders, is marked by a stone near the north end of the Älvsborg Bridge in the Färjenäs Park. The church was built in 1603 and destroyed in 1611. The city was heavily influenced by the Dutch, Germans, and Scots, and Dutch planners and engineers were contracted to construct the city as they had the skills needed to drain and build in the marshy areas chosen for the city.

The town was designed like Dutch cities such as Amsterdam, Batavia (Jakarta) and New Amsterdam (Manhattan). The planning of the streets and canals of Gothenburg closely resembled that of Jakarta, which was built by the Dutch around the same time. The Dutchmen initially won political power, and it was not until 1652, when the last Dutch politician in the city’s council died, that Swedes acquired political power over Gothenburg. During the Dutch period, the town followed Dutch town laws and Dutch was proposed as the official language in the town. Robust city walls were built during the 17th century.

In 1807, a decision was made to tear down most of the city’s wall. The work started in 1810, and was carried out by 150 soldiers from the Bohus regiment.

Along with the Dutch, the town also was heavily influenced by Scots who settled down in Gothenburg. Many became people of high-profile. William Chalmers, the son of a Scottish immigrant, donated his fortunes to set up what later became the Chalmers University of Technology. In 1841, the Scotsman Alexander Keiller founded the Götaverken shipbuilding company that was in business until 1989. His son James Keiller donated Keiller Park to the city in 1906.

The Gothenburg coat of arms was based on the lion of the coat of arms of Sweden, symbolically holding a shield with the national emblem, the Three Crowns, to defend the city against its enemies.

In the Treaty of Roskilde (1658), Denmark–Norway ceded the then Danish province Halland, in the south, and the Norwegian province of Bohus County or Bohuslän in the north, leaving Gothenburg less exposed. Gothenburg was able to grow into a significant port and trade centre on the west coast, because it was the only city on the west coast that, along with Marstrand, was granted the rights to trade with merchants from other countries.

In the 18th century, fishing was the most important industry. However, in 1731, the Swedish East India Company was founded, and the city flourished due to its foreign trade with highly profitable commercial expeditions to China.

The city was named after the Geats (Swedish: Götar varied: Geatas, Gautar, Goths, Gotar, Gøtar, Götar, Gothenborg), the inhabitants of Gothia, now southern Sweden—i.e. “Geat Castle”. The river on which the city sits is the Göta älv or Gothia River. Göta borg “Gothia Fortress” is the fort on the Göta Älv, built to protect the port.

In Dutch, Scots, and English, all being languages with a long history of being spoken in this trade and maritime-oriented city, the name Gothenburg is used for the city. The French form of the city name is Gothembourg, but in French texts, the Swedish name Göteborg is more frequent. “Gottenburg” can also be seen in some older English texts.

These traditional forms are now sometimes replaced with the use of the Swedish Göteborg, for example by The Göteborg Opera and the Göteborg Ballet. However, Göteborgs universitet, previously designated as the Göteborg University in English, changed its name to the University of Gothenburg in 2008. The Gothenburg municipality has also reverted to the use of the English name in international contexts.

Other old variations in Swedish are Götheborgh, and the more common Götheborg. One English text, written in the late 15th century, states the name as “Guthaeborg”.

In 2009, the city council launched a new logotype for Gothenburg. Since the name “Göteborg” contains the Swedish letter “ö” the idea was to make the name more international and up to date by “turning” the “ö” sideways. As of 2015, the name is spelled “Go:teborg” on a large number of signs in the city.