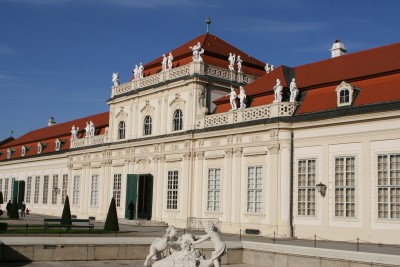 The Belvedere is a historic building complex in Vienna, Austria, consisting of two Baroque palaces (the Upper and Lower Belvedere), the Orangery, and the Palace Stables. The buildings are set in a Baroque park landscape in the third district of the city, on the south-eastern edge of its centre. It houses the Belvedere museum. The grounds are set on a gentle gradient and include decorative tiered fountains and cascades, Baroque sculptures, and majestic wrought iron gates. The Baroque palace complex was built as a summer residence for Prince Eugene of Savoy.

The Belvedere was built during a period of extensive construction in Vienna, which at the time was both the imperial capital and home to the ruling Habsburg dynasty. This period of prosperity followed on from the commander-in-chief Prince Eugene of Savoy’s successful conclusion of a series of wars against the Ottoman Empire.

After lunch Gustav Mahler (1860-1911) and Alma Mahler (1879-1964) walked through the nearby Belvedere. Four rounds, schematically. A brisk walk through large park with its eerily correct symmetry, its clean beds and trimmed hedges. It radiates a rationality that the composer should have appealed. 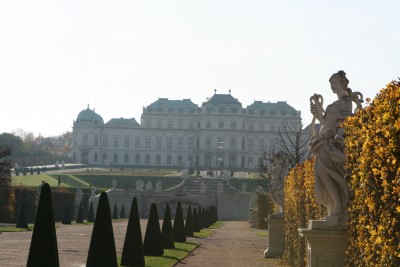