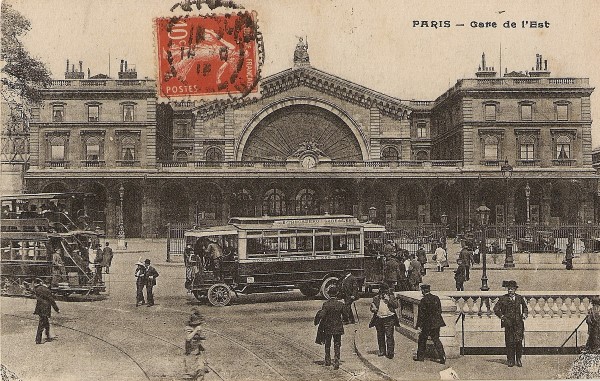 The Gare de l’Est was opened in 1849 by the Compagnie du Chemin de Fer de Paris à Strasbourg (the Paris-Strasbourg Railway Company) under the name “Strasbourg platform.” This platform corresponds today with the hall for main-line trains, and was designed by the architect François Duquesnay. It was renamed the “Gare de l’Est” in 1854, after the expansion of service to Mulhouse.

Renovations to the station followed in 1885 and 1900. In 1931 it was doubled in size, with the new part of the station built symmetrically with the old part. This transformation changed the surrounding neighborhood significantly.

At the top of the west façade of the Gare de l’Est is a statue by the sculptor Philippe Joseph Henri Lemaire, representing the city of Strasbourg, while the east end of the station is crowned by a statue personifying Verdun, by Varenne. These two cities are important destinations serviced by Gare de l’Est.

On 4 October 1883, the Gare de l’Est saw the first departure of the Orient Express for Istanbul.

The Gare de l’Est is the terminus of a strategic railway network extending towards the eastern part of France, and it saw large mobilizations of French troops, most notably in 1914, at the beginning of World War I. In the main-line train hall, a monumental painting by Albert Herter, dating from 1926, illustrates the departure of these soldiers for the Western front.