It was begun in 1783, with its central harbour wall was completed in 1853 – this was 3.64 km long, an average of 100m wide at its base and an average of 12 m wide at its top, and sited 4 km from the coast. Three forts were added to the central wall in 1860. This and the two other harbour-walls stretch for more than6 km. The eastern opening into the harbour is 950 m wide and the western one 2.3 km wide. The harbour’s maximum depth is 13 m at low tide.

The transfer of passengers and cargo

In the shelter of the great seawall, liners rode at anchor in the roadstead. The basins of the little harbour were too narrow and shallow for them to bearth. Small steamers were used to ferry passengers and cargo from the boarding quays to the liners. They were known as ferries.

Only three transatlantic companies used the port of Cherbourg in 1900, the number rose to seven in 1913 and eleven in 1927. These companies were mostly English (Cunard, Royal Mail and White Star Line), but also Greek, Belgian (Red Star), Swedish, American, Canadian (Canadian Pacific) and German (Hamburg Amerika Line). Historically Cherbourg has been used for mercantile shipping as well as a naval base. 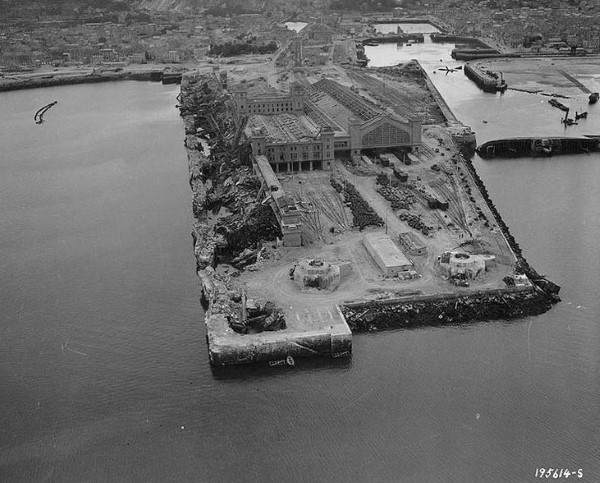 A second wave of emigration took place in Europe between 1900 and 1914 and involved migrants essentially from Eastern Europe. Their reasons for emigrating were not only to avoid the economic crisis but also on political or religious grounds. But whatever the motivation, the dream remained the same: finding a better life. Almost 70,000 transatlantic passengers travelled through Cherbourg-Octeville harbour in 1913. This exodus was of course cut off abruptly by the First World War, but resumed again from 1919 on with increased strength. Emigration was nevertheless to be rapidly curtailed and particularly towards the United States, with the creation of a quotas law in 1921. However, it was Black Thursday in 1929 that really brought about the end of this large-scale emigration.