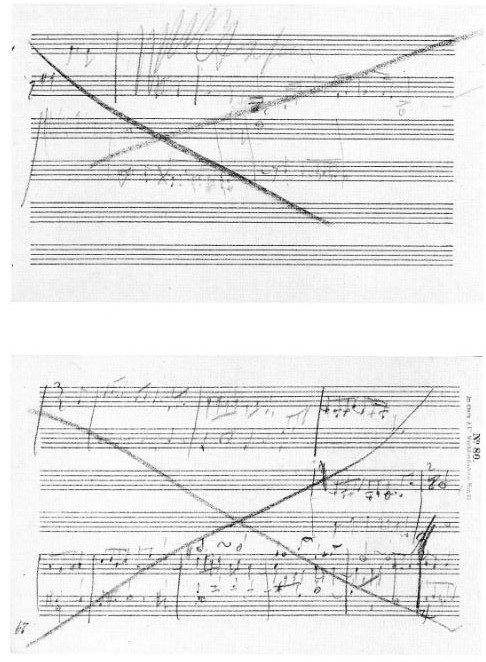 Among the manuscripts preserving the earliest stages of the composition of Symphony No. 7, a most important group of sketches for the first movement of the work, together with one for the last, is found in the Theatermuseum (theatre collection) in Vienna, as part of the estate of the singer Anna Bahr-von Mildenburg (1872-1947). They are contained in a sketchbook that Mahler probably used at the very end of his life. See Last sketch book.

A card by Anna Bahr-von Mildenburg (1872-1947) accompanying the small volume bears the following inscription: “Gustav Mahler’s last sketch book. It lay on his breast when he died. His father-in-law (the painter Carl Julius Rudolf Moll (1861-1945)) took it with him and gave it to me today, 25-01-1943, when he visited me. I also gave him letters from Gustav Mahler to read”.

In fact, one group of sketches in the book does not seem to belong to any known work, and thus may preserve some of Mahler’s last musical thoughts.

A second group, however, is crearly connected with Symphony No. 7, and suggests that toward the end of his life Mahler had picked up an old and still partly blank notebook and used it again. The sketches for Symphony No. 7 are all found on the opposite sides of the pages of the later group, and are upside-down in relation to the latter. The fact that many of them appear toward the end of the volume also suggests that the current end of the volume, dating from the time it was re-used, was originally its beginning. Hence the Symphony No. 7 sketches might best be studied in reverse order in relation to the later pagination. At the same time, one should not assume that they were necessarily written in the order in which they appear.

Not all the sketches can be correlated with the final form of the work, but certain connections can be made.The sketches range from a few bars to twelve or thirteen.

Alhought not absolutely conclusive, the presence of sketches from the first and last movements together in the same book provides some evidence that Mahler worked on these two movements at approximately the same time, which would tend to confirm his statement about the matter.