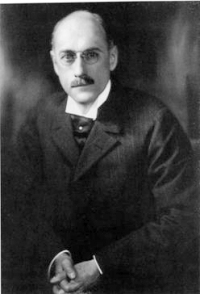 Born in New Orleans, Louisiana to John Albert Morris and Cora Hennen, the daughter of Judge Alfred Hennen. He earned a Master’s degree from Columbia University and in 1896 graduated from Harvard University. He became an attorney and was admitted to the New York Bar. Following his father’s death in 1895, Dave Morris inherited considerable wealth and held business interests in railroads, hotels, and other enterprises. He was vice-president of the St. Louis Southwestern Railway Co. (Cotton Belt Route).

From 1933 to 1937, he was the United States Ambassador to Belgium and Envoy to Luxembourg. During this joint appointment, he resided in Belgium, where he and his wife continued to make international contacts for the language that would later take the name Interlingua. He also was Vice President of the Research Corporation and Counselor of the Belgian-American Educational Foundation, where Ezra Clark Stillman was Secretary.

With his wife Alice Vanderbilt Shepard, a granddaughter of William Henry Vanderbilt, he co-founded the IALA, which in 1951 would present Interlingua to the general public. He was treasurer of the IALA from its establishment in 1924 to his death in 1944. His son, Lawrence, then assumed the position. In 1928 the Morris’s twenty-four-year-old son Noel committed suicide.

His father was a prominent figure in Thoroughbred horse racing who owned Morris Park Racetrack in The Bronx, New York. David Morris and brother Alfred, a Vice-Chairman and steward of The Jockey Club, owned, bred, and raced a number of successful Thoroughbreds. Among their major racing wins were the 1898 Belmont Stakes with Bowling Brook, and the 1899 Kentucky Derby with Manuel.

For his new residence on East 70th Street, Dave H. Morris commissioned the M.P. Möller firm of Hagerstown, Md., to build a new organ. The Agreement (Oct. 14, 1909) shows that this organ would have three manuals with electric action, and would cost $5,500, plus title to the old Hutchings organ at 269 West 72nd Street. Möller also agreed to dismantle and remove the Hutchings organ between June 1 – July 1, 1910; however, if by April 1st the purchaser of the old house wished to retain the organ, Möller would be paid $1,500 cash for the organ. Möller further agreed to pay all commissions or other moneys due to the Art Organ Co. by Mr. Morris as a result of the contract. The organ included a Solo Player that would play “58 note standard music operating on any or all of the stops, couplers, pistons and devices drawn by the performer in any solo combination similar to the effects secured on the 116 note Aeolian tracker board,” and Möller agreed to provide “100 rolls of music properly cut for solo from any catalogue of standard 58 note music to be selected by the purchaser, within 10 days after placing order with him at a cost not to exceed 50% above the regular catalogue price of music unprepared for solo. Operationg of solo device shall not require any other personal or mechanical aid on the part of the performer that is required by the said Aeolian 116 note device.” Möller stated that the new organ would be ready for use on or before August 1, 1910, or as soon thereafter as possible. The organ was shipped on November 30, 1910.

In a letter to Möller dated March 2, 1911, Morris confirmed a conversation of that same day concerning additions to the organ. First, an Echo Organ having four stops (Vox Humana 8′, Fern Flute 4′, Quintadena 8′, and Viola Aetheria 8′ – all with 61 pipes) was to be be installed in the fifth floor broom closet at the head of the stairs. The Echo would be available only on the Swell manual of the Main Organ, with the 16′ – 4′ couplers controlling the stops. A separate tremolo would be included, and an additional swell pedal would be fitted in the console. Secondly, Morris ordered “a Harp stop in the main instrument equal, or superior to the best devices of the kind made by other builders.” Morris agreed to pay a consideration of $2,000 for the additions, plus costs over $100 for the installation of necessary wind trunks, cables, etc.

The Morris organ was favorably described in an article entitled, “An Ideal Home Organ” in an 1912 issue of The New Music Review:

In the organ it was desired to achieve an instrument of a pronounced orchestral type, and the specifications suggested by Möller were submitted for criticism to the late Gustav Mahler, Mr. Walter Damrosch and other eminent orchestral authorities. Some of the ideas resulting were incorporated in the instrument.

The organ is in four divisions, each of which is contained in a structural swell-box of fireproof material. The console is attached to the casework which screens the two main divisions of the organ, and this part of the instrument is on the second floor opposite the staircase. The great stair well disperses the tone effectively through all the principal rooms of the house. About thirty feet away, at the end of the large hall, screened by a tapestry over the opening in the wall, is a special division comprising the Solo Vox Humana, the Harp, the Chimes, and three other solo stops. These have electric swell shades controlled by independent pedal. On the fifth floor adjoining the stair well is the Echo Organ, comprising the Echo Vox Humana and other stops of a distant and ethereal effect,—also controlled by electric swell shades.

The organ is also playable by the Solo-tone automatic devise [sic], using ordinary 65-note [sic] perforated rolls,—an exclusive Möller feature. This plays melody throughout the entire register of one manual, accompanying at the same time independently on another manual full compass, providing at the same time a single pedal note regardless of the position of the chord. In other words three independent voices are played simultaneously. This is absolutely unique in player mechanism.

In 1936, Mr. Morris donated this organ to the College of the City of New York. M.P. Möller rebuilt and moved the organ (as Op. 6211) to the auditorium (aka Pauline Edwards Theatre) in the “Downtown Campus” located at 17 Lexington Avenue at 23rd Street. 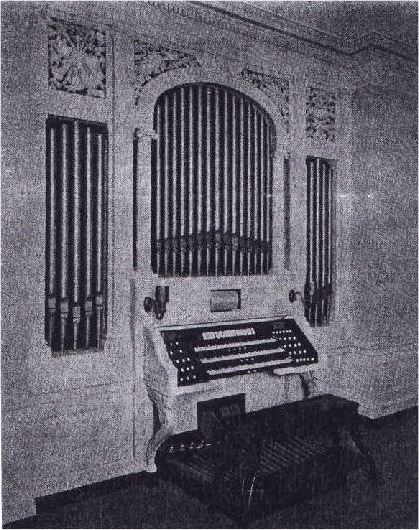