Also known as Erika Conrat, Erica Tietze. She was an Austrian-American art historian, one of the first women to study art history, a strong supporter of contemporary art in Vienna and an art historian specializing in Renaissance art and the Venetian school drawings.Youngest daughter of a rich Viennesebusinessman, Hugo Conrat (1845-1906), who had been a close friend of Johannes Brahms (1833-1897).

Erica Conrat came from a prominent Jewish family in Vienna, which had converted to Protestantism. She was the youngest of three sisters, and the oldest, Ilse Conrat was a sculptor. The father Hugo Conrat (1845-1906) (also known as Hugo Cohn) was an avid music lover and friends of Johannes Brahms (1833-1897). Erica was highly musical, played the piano and was among others friends with Alexander von Zemlinsky (1871-1942) and Arnold Schoenberg (1874-1951), through which they met Karl Kraus (1874-1936). They also shared a long-standing friendship with Alma Mahler (1879-1964).

Erica Conrat studied art history at the University of Vienna from 1902 until 1905 under Franz Wickhoff and Alois Riegl and in 1905 received her doctorate with dissertation contributions to the history of Georg Raphael Donner. She was the first woman who completed the study of art history at the University of Vienna with a doctorate. In the same year Erica married fellow student Hans Tietze, he was also studying art history during the same time. This was the first “Vienna School” art history program. Europe lacked significant teaching positions for women at the time, so frequently Erica would assist her husband in research and eventually they became a research team. Between 1908 and 1910 the Tietzes had four children.

Erica and Hans Tietze were friends with many contemporary artists including Oskar Kokoschka (1886-1980) who was commissioned to paint them in 1909, the portrait is now at the Museum of Modern Art in New York. The sculptor Georg Ehrlich created two bronze busts of Hans and Erica Tietze which are now in the Österreichische Galerie Belvedere in Vienna, as well as numerous portrait drawings of Erica Tietze. 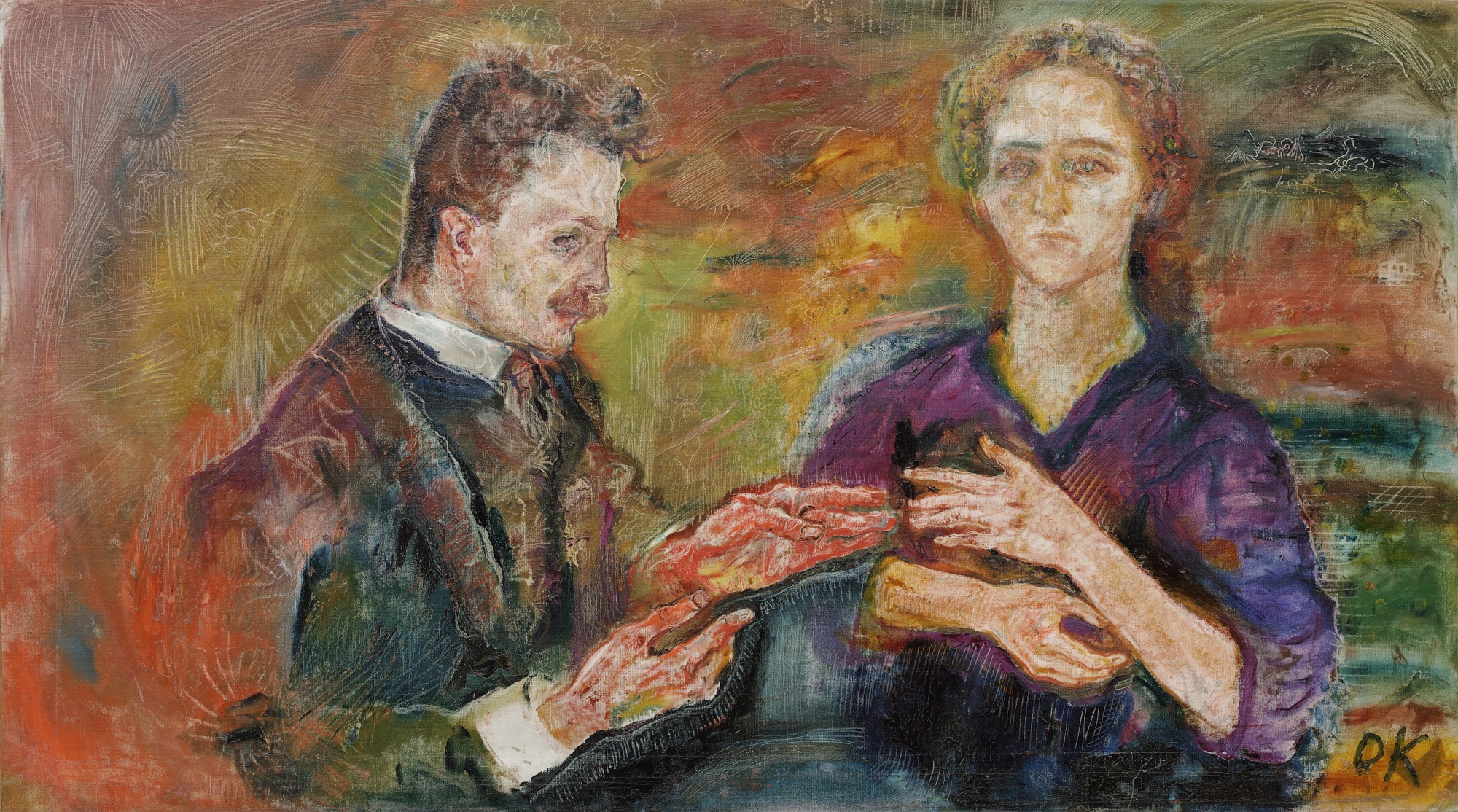 In 1938 the couple emigrated to the U.S. for political reasons during World War II, Erica Tietze worked as a researcher, academic lecturer at Columbia University and published art historical publications on Renaissance artists as well as contemporary Vienna artists until her death.

In 1970, a room at the Austrian Museum of Baroque Art was named in Erica Tietze-Conrat’s honor for her contributions to the study of Austrian artists. In the fall of 2004 the International Hans Tietze and Erica Tietze-Conrat society founded in Vienna, which has taken the care of the complete works of art historian-married couple to the task.

She was the daughter of Hugo Conrat, a wealthy Viennese businessman with an enormous passion for music. Brahms was a dinner guest during Conrat’s childhood and versions of her father’s poetry Brahms set to music (Zigeunerlieder, opus 103). She attended the Institut Hanausek until age twelve and then the new Mädchenschule gymnasium, graduating in 1901.

She attended the University of Vienna between 1902-1905 where she met a young art history graduate student, Hans Tietze, both students of the first “Vienna school” art historian Franz Wickhoff. She wrote and published her dissertation under Wickhoff in 1905 on Austrian baroque sculptor Georg Raphael Donner (1693-1741), only the second woman to be graduated in art history during Wickhoff’s tenure.

Conrat married Tietze in December of 1905, the same year as her first published article. As Europe lacked any significant teaching positions for women then, Tietze-Conrat assisted her husband in his first position as an investigator for the commission on preservation of Austrian monuments (Zentralkommision für Denkmalpflege). The Tietzes had four children between 1908 and 1918. Her husband served in the Austrian army from 1914, his duties still connected with the preservation of monuments, only now in north Italy. The Tietzes were first and foremost a research team.

The Tietzes left the raising of thier children to a trusted nanny (who lived with the family until age 90). Both from well-to-do families, the art historian husband/wife team saw as part of their mission the support of contemporary art in Vienna as well as its historical research. Oskar Kokoschka was commissioned to paint a portrait of the two in 1909 (today, Museum of Modern Art, Abby Aldrich Rockefeller Fund, 651.39).

Together they helped organize the Vienna Society for the Advancement of Contemporary Art (Gesellschaft zur Förderung der modernen Kunst in Wien) in 1920. As art historians, the Tietzes worked closely together, their desks pushed facing each other in order to facilitate discussion. Each, however, continued to publish separately as well as together. Hans Tietze made guest lectures to the United States in 1932 and 1935, Erica joining him on the second journey.

The discovery of a large amount of material in the Uffizi on Venetian drawings by Erica Tietze-Conrat gave her the idea to publish a catalog of drawings from the Republic. From 1935 onward they traveled with that thought in mind. When the Anschluss came in 1938, Tietze-Conrat was in Italy, unaware of the situation. Her husband escaped Austria (both were from Jewish-extraction families) and met her in Italy. After word that their grown children were safe, the couple continued their research, visiting museums in the Netherlands and Paris. In 1939 they emigrated to the United States, leaving their housekeeper to watch over their Austrian home throughout the war.

Hans Tietze taught for a single year as a Carnegie Professor at the Toledo Museum of Art before the couple moved to New York. During these financially difficult times, they sold their Kokoschka and joined the large cultural expatriate community there. They became American citizens in 1944. Hans never found an academic appointment in America, his only income coming from occasional assignments from the Metropolitan Museum of Art and the National Gallery of Art, Washington. When Columbia University offered him a course on Venetian art in the spring semester of 1954, Tietze, who was dying of cancer, was too ill to finish the class. Erica completed the lectures and was subsequently asked to lecture at Columbia again in 1955 and 1956. This was her only academic position as well. Her strong convictions to art remained.

As a young Ph.D. candidate from Princeton, Thomas Hoving recalled Tietze Conrat’s intimidating shouts of “You–Are–Wrong!” at graduate student symposia at the Frick Collection (McPhee). In 1955 she published a monograph on Mantegna and two years later, Dwarfs and Jesters in Art. In 1970 a room in the Österreichisches Barockmuseum, Lower Belvedere, was named in her honor for having revived the study of neglected Austrian masters such as Donner. Both Tietze-Conrat and her husband are noted for their compilation of fastidious catalogs. The three-volume critical catalog of Albrecht Dürer (1928-38) contains all the categories of a modern evaluative catalogue raisonné.

Many of the articles both published were the result of their research in catalog compilation. Their second combined achievement, a critical catalog of Venetian drawings (1944), required that they examine a relatively untouched area of Italian works on paper. Unlike Roman or Florentine, Venetian drawings were relatively unstudied. Savvy enough to understand that students often copied master drawings, they used carefully developed standards to authenticate autograph pieces. Some of their findings and attributions have not borne the test of time, particularly their assertion that the “Sketchbooks of Jacopo Bellini” represent many artists work over a range of years.