Jean Paul, born Johann Paul Friedrich Richter, was a German Romantic writer, best known for his humorous novels and stories. Jean Paul was born at Wunsiedel, in the Fichtel Mountains (Franconia). His father was an organist at Wunsiedel. In 1765 his father became a pastor at Joditz near Hof and, in 1767 at Schwarzenbach, but he died on 25 April 1779,leaving the family in great poverty. After attending the Gymnasium at Hof, in 1781 Jean Paul went to the University of Leipzig. His original intention was to enter his father’s profession, but theology did not interest him, and he soon devoted himself wholly to the study of literature. Unable to maintain himself at Leipzig he returned in 1784 to Hof, where he lived with his mother. From 1787 to 1789 he served as a tutor at Töpen, a village near Hof; and from 1790 to 1794 he taught the children of several families in a school he had founded in nearby Schwarzenbach.

Jean Paul began his career as a man of letters with Grönländische Prozesse (“Greenland Lawsuits”), published anonymously in Berlin in 1783-1784, and Auswahl aus des Teufels Papieren (“Selections from the Devil’s Papers”, signed J. P. F. Hasus), published in 1789. These works were not received with much favour, and in later life even their author had little sympathy for their satirical tone. Jean Paul’s outlook was profoundly altered by a spiritual crisis he suffered on November 15, 1790, in which he had a vision of his own death. His next book, Die unsichtbare Loge (“The Invisible Lodge”), a romance published in 1793 under the pen-name Jean Paul (in honour of Jean-Jacques Rousseau), had all the qualities that were soon to make him famous, and its power was immediately recognized by some of the best critics of the day.

The book’s slightly supernatural theme, involving a Doppelgänger and pseudocide, stirred some controversy over its interpretation of the Resurrection, but these criticisms served only to draw awareness to the author. This series of writings assured Richter a place in German literature, and during the rest of his life every work he produced was welcomed by a wide circle of admirers.

After his mother’s death in 1797, Richter went to Leipzig, and in the following year, to Weimar, where he started work on his most ambitious novel, Titan, published between 1800-1803. Richter became friends with such Weimar notables as Johann Gottfried Herder, by whom he was warmly appreciated, but despite their close proximity, Richter never become close to Johann Wolfgang von Goethe or Friedrich Schiller, both of whom found his literary methods repugnant; but in Weimar, as elsewhere, his remarkable conversational powers and his genial manners made him a favorite in general society.  The English writers Thomas Carlyle and Thomas De Quincey took an interest in Jean Paul’s work.

In 1801 he married Caroline Meyer, whom he had met in Berlin the year before. They lived first at Meiningen, then at Coburg; and finally, in 1804, they settled at Bayreuth. Here Richter spent a quiet, simple, and happy life, constantly occupied with his work as a writer. In 1808 he was fortunately delivered from anxiety about outward necessities by Prince Primate Karl Theodor von Dalberg, who gave him an annual pension of 1,000 florins, which was later continued by the king of Bavaria. 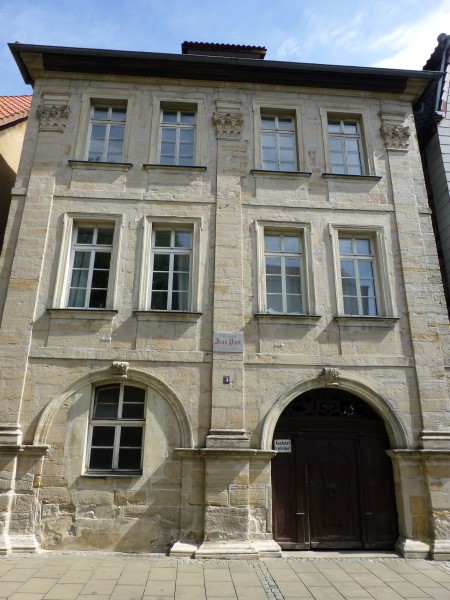 In Vorschule der Aesthetik (“Introduction to Aesthetics”, 1804) he expounded his ideas on art; he discussed the principles of education in Levana, oder Erziehungslehre (“Levana, or, Pedagogy”, 1807); and the opinions suggested by current events he set forth in Friedenspredigt (“Peace Sermon”, 1808), Dämmerungen für Deutschland (“Twilights for Germany”, 1809), Mars und Phöbus Thronwechsel im Jahre 1814 (“Mars and Phoebus Exchange Thrones in the Year 1814”, 1814), and Politische Fastenpredigten (“Political Lenten Sermons”, 1817).

In his last years he began Wahrheit aus Jean Pauls Leben (“The Truth from Jean Paul’s Life”), to which additions from his papers and other sources were made after his death by C. Otto and E. Förster. 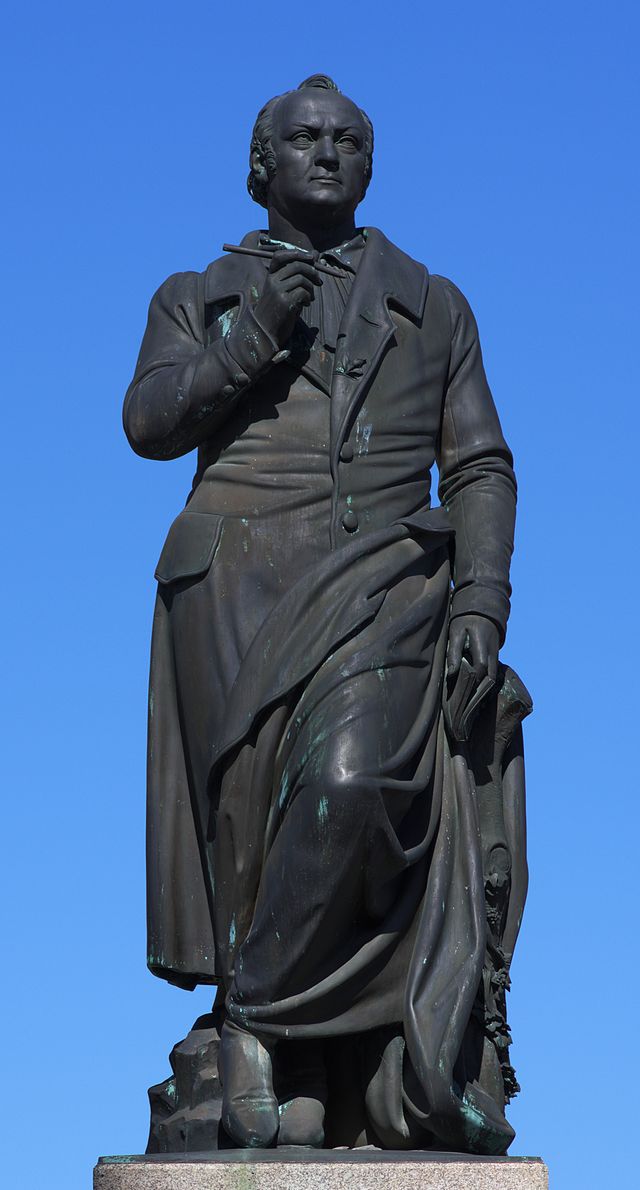 Jean Paul (1763-1825). Monument in Bayreuth, created by Ludwig von Schwanthaler and unveiled in 1841 on the 16th anniversary of Richter’s death.

Also during this time he supported the younger writer E. T. A. Hoffmann, who long counted Richter among his influences. Richter wrote the preface to Fantasy Pieces, a collection of Hoffmann’s short stories published in 1814. In September 1821 Jean Paul lost his only son, Max, a youth of the highest promise; and he never quite recovered from this shock. He lost his sight in 1824, and died of dropsy at Bayreuth, on 14 November 1825.

Jean Paul occupies an unusual position in German literature and has always divided the literary public. Some hold him in highest veneration while others treat his work with indifference. He took the Romantic formlessness of the novel to extremes: Schlegel called his novels soliloquies, in which he makes his readers take part (in this respect going even further than Laurence Sterne in Tristram Shandy).

Jean Paul habitually played with a multitude of droll and bizarre ideas: his work is characterized by wild metaphors as well as by digressive and partly labyrinthine plots. He mixed contemplation with literary theory: alongside spirited irony the reader finds bitter satire and mild humour; next to soberly realistic passages there are romanticized and often ironically-curtailed idylls, social commentary and political statements. The quick changes of mood attracted the composer Schumann whose Papillons was inspired by Jean Paul.

His novels were especially admired by women. This was due to the empathy with which Jean Paul created the female characters in his works: never before in German literature were women represented with such psychological depth. At the same time however, his work contains misogynistic quips. Jean Paul’s character may have been as diverse and as confusing as many of his novels: he was said to be very sociable and witty, while at the same time extremely sentimental: having an almost childlike nature, quickly moved to tears. It is obvious from his works that his interests encompassed not only literature but also astronomy and other sciences.

It is no surprise that the relationship of so capricious an author with the Weimar classicists Goethe and Schiller always remained ambivalent: Schiller once remarked that Jean Paul was as alien to him as someone who fell from the moon, and that he might have been worthy of admiration “if he had made as good use of his riches as other men made of their poverty.” Herder and Wieland on the other hand fully appreciated his work and supported him.

Although he always kept his distance from the classicists, who wanted to “absolutize” art, and although his theoretical approach (most notably in his Introduction to Aesthetics) was considerably influenced by Romanticism, it would be misleading to call him a Romantic without qualification. Here too he kept his distance: with all his subjectivism he didn’t absolutize the subject of the author as the Romantics often did. Jean Paul had what had become rare amidst classical severity and romantic irony: humour. He also was one of the first who approached humour from a theoretical standpoint.

He thought that both the Enlightenment and metaphysics had failed, though they still held importance for his worldview. He arrived at a philosophy without illusions, and a state of humorous resignation. Correspondingly he was one of the first defenders of Schopenhauer’s philosophy. He didn’t try to indoctrinate but to portray human happiness, even (and especially) in an increasingly alienated environment — the rococo castles and bleak villages of Upper Franconia.

Jean Paul was not only the first to use and name the literary motive of the Doppelgänger, he also utilised it in countless variations (e.g. Siebenkäs and Leibgeber, Liane and Idoine, Roquairol and Albano). In his novel Siebenkäs he defines the Doppelgänger as the “people who see themselves.” 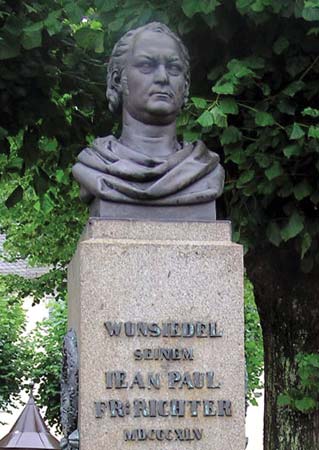 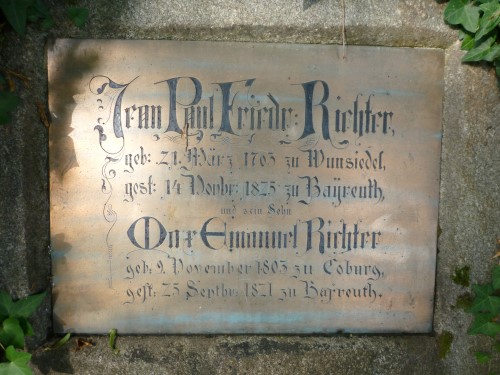