Johann Wolfgang von Goethe was a German writer and statesman. His body of work includes epic and lyric poetry written in a variety of metres and styles; prose and verse dramas; memoirs; an autobiography; literary and aesthetic criticism; treatises on botany, anatomy, and colour; and four novels. In addition, numerous literary and scientific fragments, more than 10,000 letters, and nearly 3,000 drawings by him are extant. A literary celebrity by the age of 25, Goethe was ennobled by the Duke of Saxe-Weimar, Karl August in 1782 after first taking up residence there in November 1775 following the success of his first novel, The Sorrows of Young Werther. He was an early participant in the Sturm und Drang literary movement.

During his first ten years in Weimar, Goethe served as a member of the Duke’s privy council, sat on the war and highway commissions, oversaw the reopening of silver mines in nearby Ilmenau, and implemented a series of administrative reforms at the University of Jena. He also contributed to the planning of Weimar’s botanical park and the rebuilding of its Ducal Palace, which in 1998 were together designated a UNESCO World Heritage Site.

After returning from a tour of Italy in 1788, his first major scientific work, the Metamorphosis of Plants, was published. In 1791 he was made managing director of the theatre at Weimar, and in 1794 he began a friendship with the dramatist, historian, and philosopher Friedrich Schiller, whose plays he premiered until Schiller’s death in 1805. During this period Goethe published his second novel, Wilhelm Meister’s Apprenticeship, the verse epic Hermann and Dorothea, and, in 1808, the first part of his most celebrated drama, Faust. His conversations and various common undertakings throughout the 1790s with Schiller, Johann Gottlieb Fichte, Johann Gottfried Herder, Alexander von Humboldt, Wilhelm von Humboldt, and August and Friedrich Schlegel have, in later years, been collectively termed Weimar Classicism.

Arthur Schopenhauer cited Wilhelm Meister’s Apprenticeship as one of the four greatest novels ever written and Ralph Waldo Emerson selected Goethe as one of six “representative men” in his work of the same name, along with Plato, Napoleon, and William Shakespeare. Goethe’s comments and observations form the basis of several biographical works, most notably Johann Peter Eckermann’s Conversations with Goethe. There are frequent references to Goethe’s writings throughout the works of G. W. F. Hegel, Arthur Schopenhauer, Friedrich Nietzsche, Hermann Hesse, Thomas Mann, Sigmund Freud, and Carl Jung.

Johann Wolfgang von Goethe’s Faust is a tragic play in two parts: Faust. Der Tragödie erster Teil (translated as: Faust: The First Part of the Tragedy) and Faust. Der Tragödie zweiter Teil (Faust: The Second Part of the Tragedy). Although rarely staged in its entirety, it is the play with the largest audience numbers on German-language stages. Faust is Goethe’s most famous work and considered by many to be one of the greatest works of German literature. Goethe completed a preliminary version of Part One in 1806. The 1808 publication was followed by the revised 1828–29 edition, which was the last to be edited by Goethe himself. Prior to these appeared a partial printing in 1790 of Faust, a Fragment.

The earliest forms of the work, known as the Urfaust, were developed between 1772 and 1775; however, the details of that development are not entirely clear. Urfaust has twenty-two scenes, one in prose, two largely prose and the remaining 1,441 lines in rhymed verse. The manuscript is lost, but a copy was discovered in 1886. Goethe finished writing Faust Part Two in 1831. In contrast to Faust Part One, the focus here is no longer on the soul of Faust, which has been sold to the devil, but rather on social phenomena such as psychology, history and politics, in addition to mystical and philosophical topics. The second part formed the principal occupation of Goethe’s last years. It appeared

The First Part of the Tragedy

The principal characters of Faust Part One include:

Faust Part One takes place in multiple settings, the first of which is heaven. Mephistopheles makes a bet with God: he says that he can lure God’s favourite human being (Faust), who is striving to learn everything that can be known, away from righteous pursuits. The next scene takes place in Faust’s study where Faust, despairing at the vanity of scientific, humanitarian and religious learning, turns to magic for the showering of infinite knowledge. He suspects, however, that his attempts are failing. Frustrated, he ponders suicide, but rejects it as he hears the echo of nearby Easter celebrations begin. He goes for a walk with his assistant Wagner and is followed home by a stray poodle (the term then meant a medium-to-big-size dog, similar to a sheep dog).

In Faust’s study, the poodle transforms into the devil (Mephistopheles). Faust makes an arrangement with the devil: the devil will do everything that Faust wants while he is here on Earth, and in exchange Faust will serve the devil in Hell. Faust’s arrangement is that if he is pleased enough with anything the devil gives him that he wants to stay in that moment forever, then he will die in that moment.

When the devil tells Faust to sign the pact with blood, Faust complains that the devil does not trust Faust’s word of honor. In the end, Mephistopheles wins the argument and Faust signs the contract with a drop of his own blood. Faust has a few excursions and then meets Margaret (also known as Gretchen). He is attracted to her and with jewellery and with help from a neighbor, Martha, the devil draws Gretchen into Faust’s arms. With influence from the devil, Faust seduces Gretchen. Gretchen’s mother dies from a sleeping potion, administered by Gretchen to obtain privacy so that Faust could visit her. Gretchen discovers she is pregnant. Gretchen’s brother condemns Faust, challenges him and falls dead at the hands of Faust and Mephistopheles. Gretchen drowns her illegitimate child and is convicted of the murder. Faust tries to save Gretchen from death by attempting to free her from prison. Finding that she refuses to escape, Faust and the devil flee the dungeon, while voices from Heaven announce that Gretchen shall be saved – “Sie ist gerettet” – this differs from the harsher ending of Urfaust – “Sie ist gerichtet!” – “she is condemned.”

The Second Part of the Tragedy

Rich in classical allusion, in Part Two the romantic story of the first Faust is forgotten, and Faust wakes in a field of fairies to initiate a new cycle of adventures and purpose. The piece consists of five acts (relatively isolated episodes) each representing a different theme. Ultimately, Faust goes to heaven, for he loses only half of the bet. Angels, who arrive as messengers of divine mercy, declare at the end of Act V: “He who strives on and lives to strive/ Can earn redemption still”. 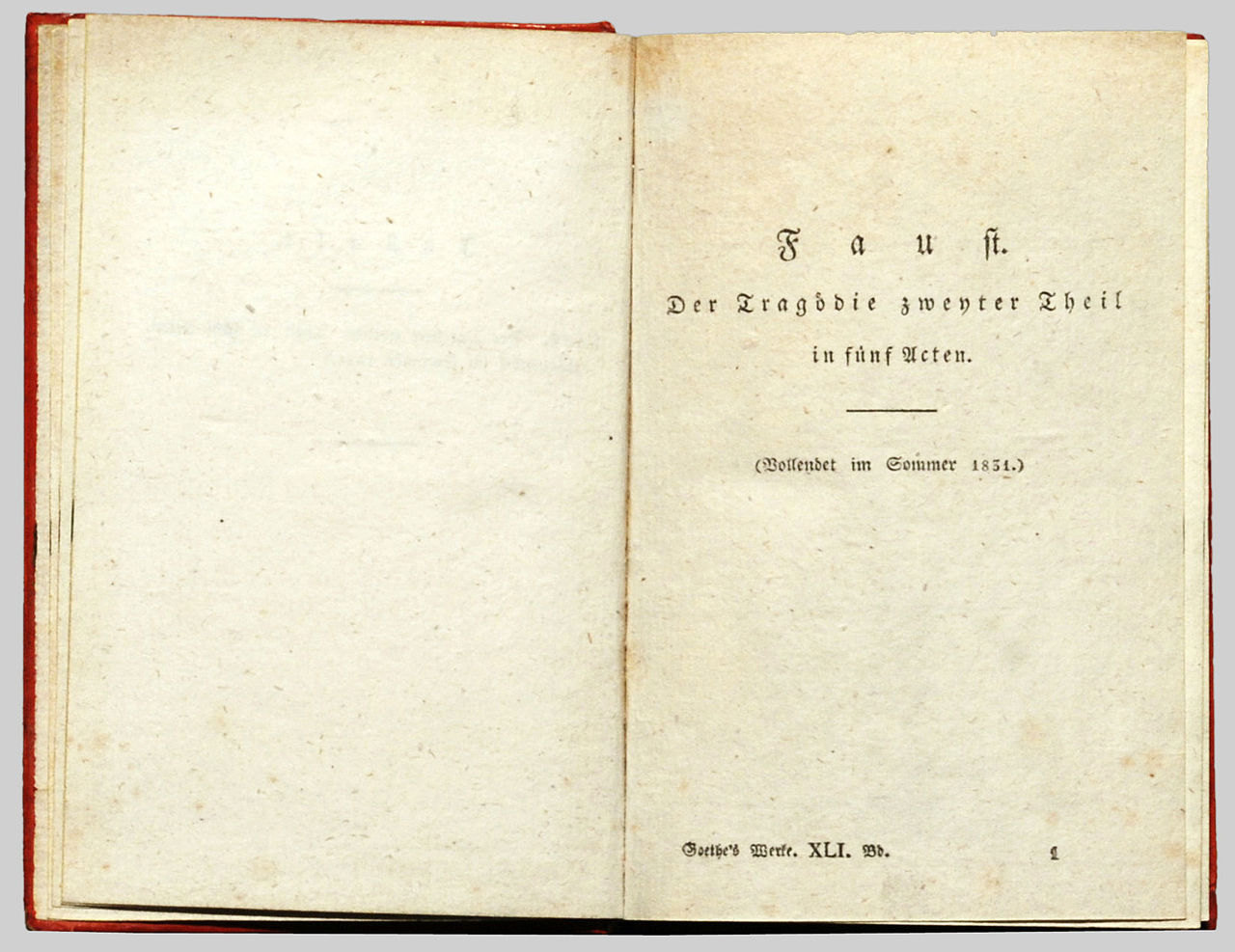 Relationship between the parts

Throughout Part One, Faust remains unsatisfied; the ultimate conclusion of the tragedy and the outcome of the wagers are only revealed in Faust Part Two. The first part represents the “small world” and takes place in Faust’s own local, temporal milieu. In contrast, Part Two takes place in the “wide world” or macrocosmos.

Faust does not seek power through knowledge, but access to transcendent knowledge denied to the rational mind. Here Goethe’s mysticism asserts itself clearly.

Goethe’s Faust has inspired a great deal of literature, music, and illustration. Walter Kaufmann asserts that “Goethe created a character [i.e. Faust] who was accepted by his people as their ideal prototype.”

Although today many of the classical and Central European themes may be hard for the modern reader to grasp, the work remains a resonant parable on scientific learning and religion, passion and seduction, independence and love, as well as other subjects. In poetic terms, Goethe places science and power in the context of a morally interested metaphysics. Faust is a scientific empiricist who is forced to confront questions of good and evil, God and the devil, sexuality and mortality.

The German language has itself been influenced by Goethe’s Faust, particularly by the first part. One example of this is the phrase “des Pudels Kern,” which means the real nature or deeper meaning of something (that was not evident before). The literal translation of “des Pudels Kern” is “the core of the poodle,” and it originates from Faust’s exclamation upon seeing the poodle (which followed him home) turn into Mephistopheles. Another instance originates in the scene wherein Gretchen asks Faust if he is religious. In German, the word “Gretchenfrage” (literally “Gretchen question”) refers to a question aiming at the core of the issue, often forcing the answering person to make a confession or a difficult decision.