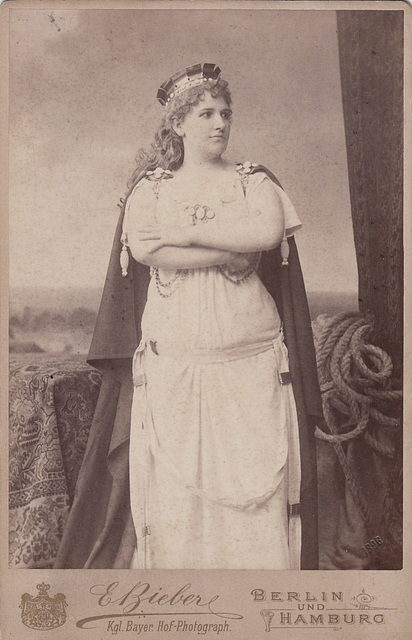 Hungarian soprano. Hungarian operatic singer, was born at Szt János, Wieselburg, of humble parents. Being employed at Vienna as a nurserymaid, her fine soprano voice led to her being engaged as a chorus singer, and she was given good lessons in music. By 1882 she became well-known in Wagnerian rôles at the Leipzig theatre, and she increased her reputation at other German musical centres. In 1892 she appeared in London, and had a great success in Wagner’s operas, notably as Brünnhilde and as Isolde, her dramatic as well as vocal gifts being of an exceptional order. She sang in America in 1895, but died of brain disease in 1896.

In 1874 she started her career as a choir singer at the “Komischen Oper Wien”. After further singing studies, in 1876 she was engaged at the “Opernhaus von Leipzig”, were she sang comprimario roles. She continued her singing study with various teachers and finally the famous teacher Mathilde Marchesi –who was convinced of her great talent- gave her free singing lessons. In 1879 she became “First soprano” at Leipzig. From 1883/86 she was engaged at the “Stadttheater von Bremen” and from 1886/95 at the “Stadttheater von Hamburg”. She made guest appearances at Berlin, Vienna and London (as Wellgunde and Waltraute in Wagner’s Ring-cycle).

In the season 1895/96 she sang with the Damrosch Opera Company in the USA. At the end of this tour she was engaged by the Metropolitan Opera of New York for the next season, but this was prevented by her sudden death on September 11, 1896 at the age of 41. She married three times; her first husband was a merchant called Liebermann, her second husband the baritone Franz Greve (1844-1892) and her third husband the conductor Otto Lohse (1858-1925).