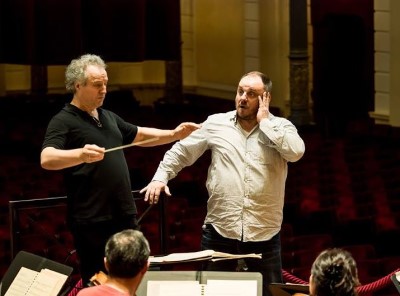 Manfred Honeck is an Austrian conductor and the Music Director of the Pittsburgh Symphony Orchestra since the 2008-2009 season. In 2018, he was named Artist of the Year by the International Classical Music Awards.

Beginning as a violinist, Honeck received his musical training at the Academy of Music in Vienna, and later played the viola. He was later a musician in the Vienna Philharmonic and the Vienna State Opera Orchestra. His early work as a conductor included a period as assistant to Claudio Abbado (1933-2014) with the Vienna Gustav Mahler Jugendorchester (GMJO). In 1987, Honeck founded the Vienna Jeunesse Orchestra.

Following his work with the Mahler Jugendorchester, Honeck conducted regularly at the Zurich Opera House from 1991 to 1996. In 1993, while conducting at the Zurich Opera House, he was awarded the European Conductor’s Award. From 1997 to 1998, he was Music Director of the Norwegian National Opera in Oslo, and held a regular position from 1996 to 1999 with the MDR Symphony Orchestra Leipzig. In 1998, he was named the Principal Guest Conductor of the Oslo Philharmonic.

Honeck became the General Music Director of the Staatsoper Stuttgart in the 2007-2008 season, with an initial contract for four years. During his tenure in Stuttgart, Honeck conducted productions of Berlioz’s Les Troyens, Mozart’s Idomeneo, Verdi’s Aida, Richard Strauss’s Der Rosenkavalier, Poulenc’s Dialogues des Carmélites and Wagner’s Lohengrin and Parsifal, among other works. Honeck formally concluded his tenure with the Staatsoper Stuttgart ended in 2011.

In May 2006, in the US, Honeck made an acclaimed appearance with the Pittsburgh Symphony Orchestra (PSO). In November 2006, he returned to Pittsburgh to conduct the PSO in another concert that received strongly positive reviews.

In 2012, Honeck and the PSO performed a week-long residency at the Musikverein in Vienna, returning for three further performances during the orchestra’s Summer 2016 tour. In the Summer 2017, Honeck and the PSO toured Europe again, performing at festivals such as the BBC Proms, Luzern Festival, and the Salzburg Festival.

Honeck’s work with the Pittsburgh Symphony Orchestra has been extensively documented on recordings with the Exton and Reference labels. Honeck and the PSO have recorded four acclaimed SACDs for Reference Recordings, of Strauss tone poems, Dvorak’s Eighth Symphony and Janacek’s Jenufa Suite, Bruckner’s Fourth Symphony, and Beethoven’s Fifth and Seventh symphonies. Honeck and the PSO’s recordings of Bruckner’s Symphony No. 4 and Dvorak’s Eighth Symphony and Janacek’s Jenufa Suite were nominated for Grammy Awards in Best Orchestral Performance in 2015 and 2014, respectively.

Honeck was awarded the honorary title of Professor by the Austrian Federal President in 2016. He holds three Honorary Doctorates from Carnegie Mellon University, Catholic University of America, and Saint Vincent College.

Manfred Honeck was born in the Nenzing, Austria, near the Austrian border with Switzerland and Liechtenstein, one of nine children of Otto and Frieda Honeck. One of his brothers is the Vienna Philharmonic concertmaster Rainer Honeck. Honeck lives in the village of Altach, Vorarlberg, Austria with his wife Christiane and their six children.