Bruno Walter (1876-1962) called Nina Spiegler (Lipiner-Hoffmann) (1855-1937) ” he heart of the Pernerstorfer Circle“. She organised dinners at Hartmann restaurant and placed flowers beside Gustav Mahlers’ plate. She is five years older than Gustav Mahler.

Translated from the German, in full: “My dearest Nana, I am a terrible person not to have written to you yet (I meant to every day), and I remain a terrible person, because even today all I have to say is that I’m not going to write to you, but give you my best wishes and tell you that my thoughts are very often with you both. This year things have gone very badly for me! In the middle I lost the thread of everything, and I cannot pick all these threads up again. I feel quite miserable about it, as though I had something serious on my conscience. I’m afraid the spa music and the dreadful water is to blame for that! A stove in my room might have been my Muse—but you can’t write melodies with frozen fingers!—really it’s only a slight consolation! I’ll have to move in again on August 1st—against all the best practices, since Richter is in Bayreuth and Fuch’s Meisterhaus is not in the necessary condition as a consequence of a broken wine bottle (the only connection that this good man has with Dionysius). O! Oh! Oh! Ah! Ah! Ah! Aaaaaaa! These my sounds of distress to you! And you, poor thing! Lipiner’s Adam is a wonderful thing! I have locked it in my heart, and am very happy with it! Many best wishes to you and Albert from your hanged Gustav.” 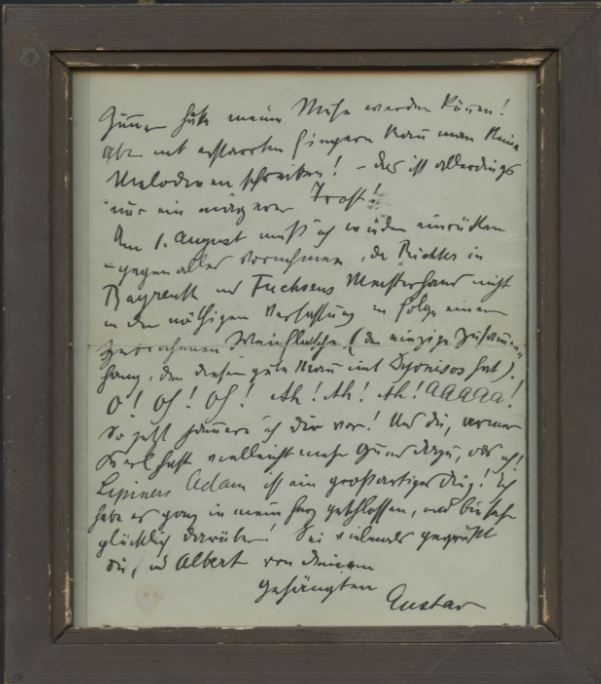 Nina Spiegler was a close friend of Gustav Mahler and a central figure in the Pernerstorfer circle a group of Viennese intellectuals formed in the 1870’s which was an important forum for Mahler’s music. She was married to the writer Siegfried Lipiner (1856-1911), mentioned in the present letter as the author of the play ‘ Adam’ , from 1881 to 1885; in 1891 she married Albert Spiegler (1856-1940), another member of her Viennese circles.