The unknown opera to which Mahler refers was probably Le villi by Giacomo Puccini (1858-1924), which had been first performed on 02-12-1892. (not listed in Schabbing’s appendix I). 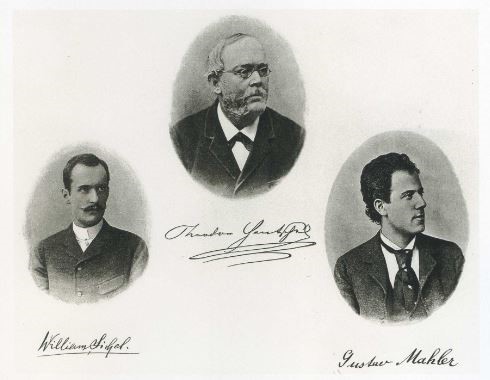 Theodor Hentschel was the son of the merchant Bernhard Hentschel and his wife Theresia Hentschel, b. Tammer, born. He was the eldest son of his father’s first marriage.

As a nine-year-old Hentschel went to the Dresdner Kapellknaben. Here, at the Kapellknaben Institute of the Catholic Court Church in Dresden, he was an alto soloist under the guidance of Angelo Cicarelli. After this time Hentschel studied at the conservatory in Prague, where he had to live in poor conditions.

In 1839, his father made a second marriage to Veronika Frost after Hentschel’s mother died. From this marriage, 12 children were born. On June 10, 1851 Theodore married Hentschel. His wife Pauline Auguste Hentschel, b. Hentschel brought fortune into the marriage.

In the season 1855/1856 Hentschel worked as an opera conductor in Halle an der Saale. The following year he became music and choral conductor at the Leipzig Theater, where in 1857 his first opera “Sailor and Singer” premiered. Three children.

In 1860 Hentschel went to Bremen as Kapellmeister for the following 30 years.

In 1890 he moved to the Hamburg City Theater, where he worked until his death as the first Kapellmeister. Theodor Hentschel died at the age of 62 years of pneumonia.