The Bohemians, a club composed of New York misicians, gave a reception and dinner in honour of Gustav Mahler, conductor of the New York Metropolitan Opera (MET), at the Hotel Astor on Saturday evening.

Hotel Astor was a hotel located in the Times Square area of Manhattan, New York City, in operation from 1904 through 1967. The former site of the hotel, the block bounded by Broadway, Astor Plaza, West 44th Street, and West 45th Street, is now occupied by the high-rise 54-story office tower One Astor Plaza.

Within its restrained exterior, the Astor featured a long list of elaborately themed ballrooms and exotic restaurants: the Old New York lobby, the American Indian Grill Room decorated with artifacts collected with the help of the American Museum of Natural History, a Flemish smoking room, a Pompeiian billiard room, the Hunt Room decorated in sixteenth century German Renaissance style, and many other features.

The Large Ballroom (or Banquet Hall), on the ninth floor, opened with a dinner that was part of the Hudson-Fulton Celebration. Measuring 50 by 85 feet (15 m × 26 m), the Banquet Hall was decorated in the Rococo style of Louis XV and featured a high-groined arch ceiling in ivory white and old gold, supported by grouped caryatids. A gallery spanned the south and west sides, affording a fine view of the room, which could accommodate 500 diners. 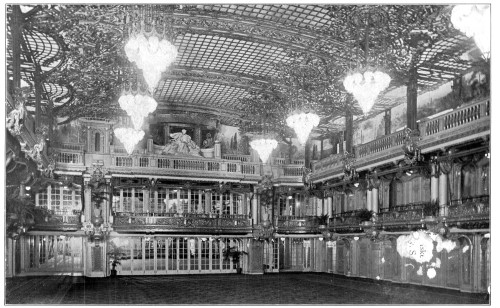 The smaller ballroom, seating 250, was decorated in the neoclassical Louis XVI manner and could be joined with the larger ballroom. Still another adjoining room, “The College Hall”, could also open to the ballroom so that the combined rooms could seat up 1,100 persons. The Palm Garden, or “L’Orangerie”, located in the rear of the first floor lobby, was intended to represent an Italian garden. Its ceiling, painted to represent a Mediterranean sky, was partly concealed by feigned vine-covered pergolas. Blue lighting, hanging lamps draped in vines, swaying fern baskets, and scenic pictures of the out-of-doors further enhanced the perception.

The rooftop garden, with bandstand and observatory, was one of a number constructed in the city between 1880 and Prohibition, among them the American Theater on Eighth Avenue, the garden atop Stanford White’s 1890 Madison Square Garden, and the Paradise Roof Garden opened by Oscar I Hammerstein (1845-1919) in 1900. In later years, the noted landscape architect Takeo Shiota redesigned the roof’s North Garden on a Japanese theme.