Krefeld, also known as Crefeld until 1929, is a city in North Rhine-Westphalia, Germany. It is located northwest of Düsseldorf, its centre lying just a few kilometres to the west of the River Rhine; the borough of Uerdingen is situated directly on the Rhine. Krefeld is also called the “Velvet and Silk City”.

A reform synagogue was built in 1876, arousing opposition from the Orthodox community. A Jewish school existed in the town, with more than 200 students around 1900. In 1938 during Kristallnacht, the two synagogues were attacked and burnt.

Krefeld, also known as Crefeld until 1929, is a city in North Rhine-Westphalia, Germany. It is located northwest of Düsseldorf, its centre lying just a few kilometres to the west of the River Rhine; the borough of Uerdingen is situated directly on the Rhine.

The town originated in Roman times when the legions founded the military camp of Gelduba (today the borough of Gellep). Records first mention Krefeld itself in 1105 under the name of Krinvelde. Uerdingen, originally an independent town east of Krefeld, founded in 1255, became in medieval times larger and more important than Krefeld.

In February 1598, Walburga, wife of Adolf van Nieuwenaar, and last Countess of Limburg and Moers, gifted the County of Moers , which included Krefeld, to Maurice, Prince of Orange. After her death in 1600, John William of Cleves took possession of these lands, but Maurice successfully defended his heritage in 1601. Krefeld and Moers would remain under the jurisdiction of the House of Orange and the Dutch Republic during the Dutch Golden Age. The growth of the town began in that century, partially because Krefeld was one of few towns spared the horrors of the Thirty Years’ War (1618-1648).

The town of Uerdingen, incorporated into Krefeld in the 20th century, was less fortunate, almost ceasing to exist, destroyed at the hands of troops from Hesse during the Thirty Years’ War. In 1683 a group of thirteen Mennonite families left Krefeld to re-settle in Pennsylvania in order to enjoy religious freedom. They crossed the Atlantic on the ship Concord, and founded the settlement of Germantown (now incorporated in Philadelphia), thus beginning the Pennsylvania Dutch ethnic identity.

After the death of William III of Orange in 1702, Krefeld passed to the Kingdom of Prussia. The Battle of Krefeld occurred nearby in 1758 during the Seven Years’ War. Krefeld and Uerdingen were included within the Prussian Province of Jülich-Cleves-Berg in 1815 (after 1822 the Rhine Province). In 1872 Krefeld became an independent city within Rhenish Prussia. 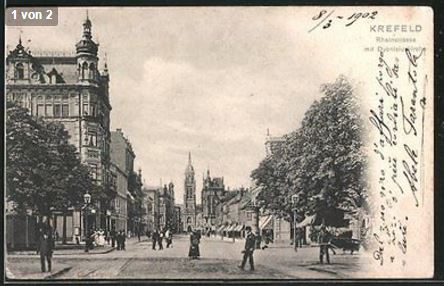 In 1918 during the First World Warthe Belgian Army used it as a base during the occupation of the Rhineland. In 1929 Krefeld and Uerdingen merged to form Krefeld-Uerdingen; in 1940 the name was shortened to simply Krefeld.

On December 11, 1941, during World War II, a detailed report on the transport of Jews from Krefeld and its surroundings listed 1007 Jews from Krefeld and Duisburg, were deported to the Š?irotava Railway Station near Riga, later to become Jungfernhof concentration camp. They were transported in freezing conditions with no drinking-water for more than two days. Almost immediately upon arrival these Jews were shot in the Rumbula forest massacre.

On 21 June 1943 British bombs destroyed large parts of east of the city; a firestorm consumed most of the city center (apart from the central train station, which remained intact apart from minor damage). On 3 March 1945 US troops entered Krefeld, among them the later U.S. Secretary of State Henry Kissinger. The town became part of the new state of North Rhine-Westphalia after World War II.

The Jews of Krefeld

Jews were listed as citizens of Krefeld from 1617. In 1764 a synagogue was erected, and by 1812, under French rule, the town included 196 Jewish families, with three Jewish-owned banks. Under Napoleon, the town became the capital for the surrounding Jewish communities including over 5000 Jews, and by 1897 they comprised 1.8% of the population. In 1846 a Jewish representative was voted onto the town’s municipal council, while rising antisemitism was noted during these elections. A reform synagogue was built in 1876, arousing opposition from the Orthodox community. A Jewish school existed in the town, with more than 200 students around 1900.

In November 1938 during Kristallnacht, the two synagogues were attacked. In 1941 following an order from Hitler to deport the German Jews to the east, Jews from the town were sent to the area around Riga and murdered there.