Joseph Fraenkel was an Austrian-American physician, endocrinologist and a neurologist. He was born in Russia and studied medicine at the University of Vienna, graduating in 1889. Not accepting the rejection of Judaism, he could not practice in Austria, and emigrated to the United States. In 1892 or 1893 he practiced in New York. He was an assistant Charles L. Dana in the Postgraduate Hospital and Medical School. He taught neurology at Cornell University Medical College. Consulted Montefiore hospital patients and (until October 1913), Bellevue.

He was a member of the Academy of Medicine and the New York Neurological Society (chairman in 1905, 1906). In 1909, together with Joseph Collins, he founded of the Neurological Institute of New York. In 1916, he married Ganna Walska, an opera singer. He died on April 24, 1920 in Post Graduate Hospital in New York City. Obituary was written by Charles L. Dana.

An accounting of the estate of Dr. Joseph Fraenkel, who died April 24, 1920, at his home, 101 East Ninety-fourth Street, was filed in the Surrogate’s Court by Herman B. Baruch, the executor. Dr. Fraenkel at the time of his death was the husband of Ganna Walska, now the wife of Harold F. McCormick of Chicago, whose first wife was the daughter of John D. Rockefeller.

From December 1907 to March 1908, he met Gustav and Alma Mahler in New York. The friendship consolidated during the second stay in New York, which lasted from November 1908 to April 1909. After Mahler’s death in 1911, he came to Vienna and asked Alma Mahler to marry him, but she refused. Instead he married Ganna Walska in 1916. 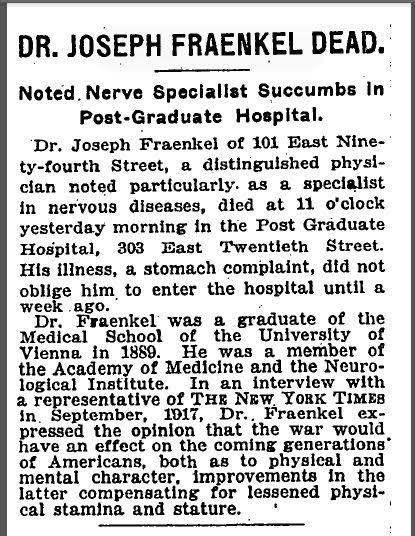