Lilli (Lilly) Lehmann, born Elisabeth Maria Lehmann, later Elisabeth Maria Lehmann-Kalisch was a German operatic soprano of phenomenal versatility. She was also a voice teacher. The future opera star’s father, Karl-August Lehmann, was a singer (Heldentenor) while her mother, Maria Theresia Löw (1809–1885), was a soprano. Her first lessons were from her mother, who had been a prima donna under Spohr at the Cassel opera. After singing small parts on the stage, for example in Mozart’s Magic Flute at Prague in 1866, and studies under Heinrich Laube in Leipzig, Lehmann made her proper debut in 1870 in Berlin as a light soprano in Meyerbeer’s Das Feldlager in Schlesien. She subsequently became so successful that she was appointed an Imperial Chamber Singer for life in 1876.

Lehmann sang in the first Bayreuth Festival in 1876, singing in the first complete performances of The Ring Cycle as Woglinde and Helmwige. She performed in London in 1884, and appeared at the New York Metropolitan Opera in 1885–1899. Together with her Met colleagues Fischer, Alvary, Brandt, and Seidl, she helped to popularise Wagner’s music in America. By remaining in America beyond the leave granted her by the Berlin Opera, she faced a ban following her return to Germany. After the personal intervention of the Emperor, the ban was lifted. She appeared at London’s Royal Opera House, Covent Garden, in 1899 and sang in Paris and Vienna in 1903 and 1909 respectively. In 1905, she sang at the Salzburg Festival, later becoming the festival’s artistic director. 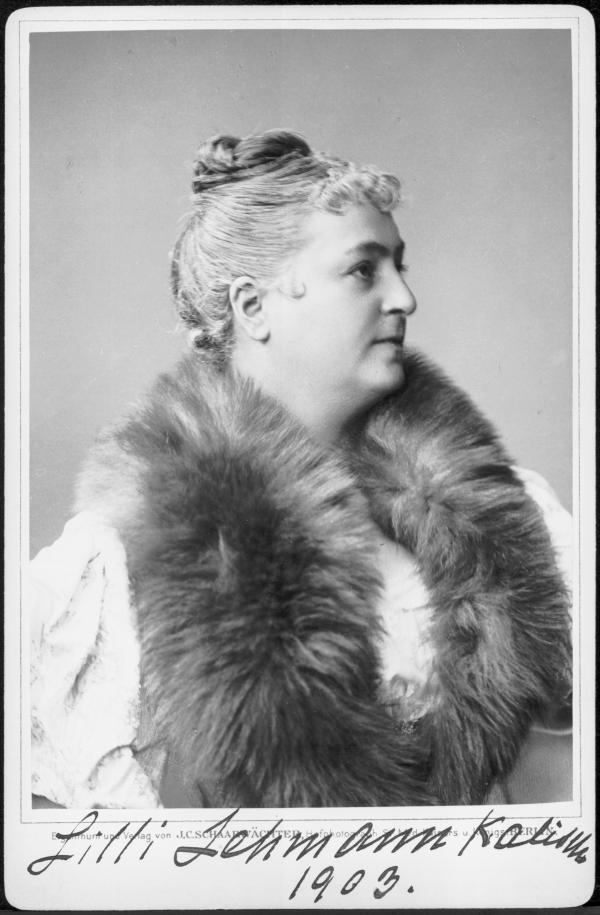 Lehmann was also renowned as a Lieder singer. She continued to give recitals until her retirement from the concert stage in the 1920s. Her mature voice, of splendid quality and large volume, gained for her the reputation of being not only one of the greatest Wagnerian singers of her day but also an ideal interpreter of Bellini’s Norma and the operatic music of Mozart. She was considered unsurpassed in the rôles of Brünnhilde and Isolde but sang an astonishingly wide array of other parts. Indeed, across the span of her career, she performed 170 different parts in a total of 119 German, Italian and French operas. She was noted not only for her rendering of the musical score, but also as a tragic actress. She was also a noted voice teacher. Among her pupils were the famous sopranos Geraldine Farrar, Viorica Ursuleac and Olive Fremstad. In 1888, she married the tenor Paul Kalisch.

Lehmann founded the International Summer Academy at the Mozarteum in Salzburg in 1916. The academy’s curriculum concentrated on voice lessons at first but it was extended later to include a wide variety of musical instruction. The Lilli Lehmann Medal is awarded by the Mozarteum in her honour. Her voice can be heard on CD reissues of the recordings which she made prior to World War I. Although past her peak as an operatic singer when she made these records, they still impress. 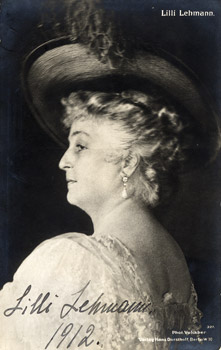 Lilli Lehman studied with her mother, the singer Marie Loewe, and made her debut in Prague in 1865 in Die Zauberflöte as the First Boy. Her formidable star began its ascent with her engagement in Berlin at the Court Opera where she sang in 1869 and 1870-1885. She appeared in the first Ring performances at Bayreuth in 1876 as Woglinde, Helmwiege, and the Forest Bird. London first saw her at Her Majesty’s Theatre in 1880 and 1882, and then at Covent Garden in 1884 and 1899. She appeared at New York’s Metropolitan Opera from 1885-1892 and 1898-1899. In addition, she made many guest appearances in Paris, Vienna, and Salzburg, where she was one of the founders of the Mozart Festival. Her repertoire included a staggering 170 roles, which ran the gamut from Lucia, Philine, Violetta, and Norma to Fidelio, the three Brünnhildes, and Isolde. Her much sought-after records were made for Odeon in 1905 and 1907. 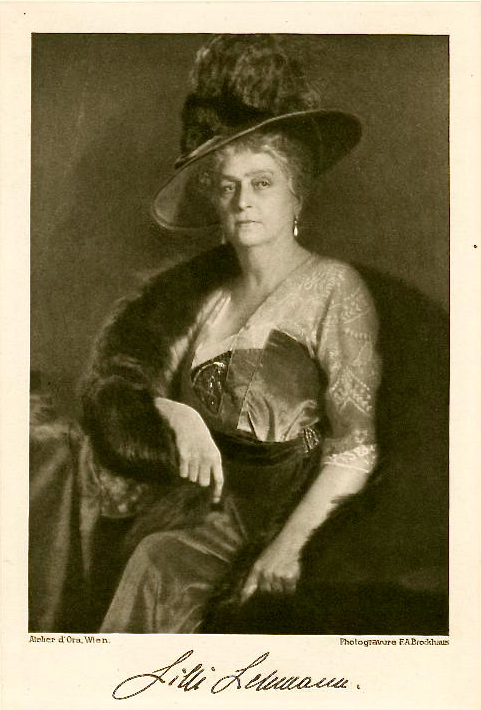 In her autobiography, Lehmann wrote that Mahler first entered her artistic life shortly after becoming director of the Hungarian National Opera in Budapest. “He informed me by letter that my terms went beyond his budget, but that he considered it absolutely necessary to engage me so as to give his associates an artistic model after which they should strive.” A great mutual respect between the two soon developed into a warm and lasting friendship, leading to Mahler’s engaging her for guest appearances in Vienna during nearly every season from 1898 until 1907. It was a performance of Tristan und Isolde conducted by Mahler during the latter year that became the occasion of Lehmann’s final appearance as Isolde. She was in the Director’s box conversing with Mahler’s wife and sister during the interval following the second act when word was received that Anna von Mildenburg had become hoarse and couldn’t continue.

Mme. Lehmann offered to sing the final act in place of her ailing colleague, was rushed backstage, and after changing into her costume and quickly going over the mis-en-scène with Mahler and Schmedes, the evening’s performance was completed. We are pleased to offer, as a valedictory to this celebration of Mahler’s Vienna Court Opera directorship, a “bonus” track: Lilli Lehmann’s unpublished Odeon recording of the “Liebestod” which exists in the form of a unique test pressing at the Historical Sound Recordings, Yale University Library, New Haven, Connecticut. 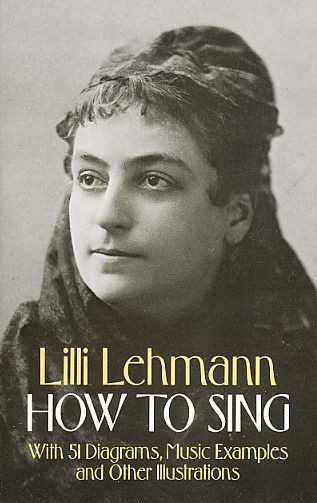