Siegfried Wagner was a German composer and conductor, the son of Richard Wagner. He was an opera composer and the artistic director of the Bayreuth Festival from 1908 to 1930.

Helferich Siegfried Richard Wagner, nicknamed “Fidi,” was born in 1869 to Richard Wagner (1813-1883) and his future wife Cosima Wagner (1837-1930) (née Liszt), at Tribschen on Lake Luzern in Switzerland. Through his mother, he was a grandson of Franz Liszt, from whom he received some instruction in harmony. 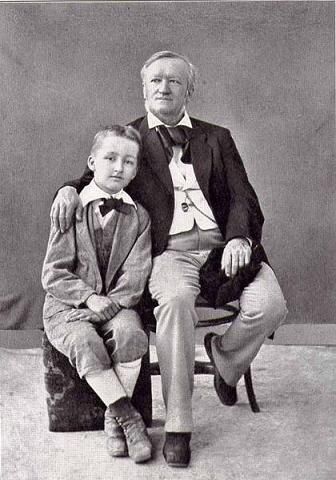 Some youthful compositions date from about 1882. After he completed his secondary education in 1889, he studied with Wagner’s pupil Engelbert Humperdinck (1854-1921), but was more strongly drawn to a career as an architect and studied architecture in Berlin and Karlsruhe.

In 1892 he undertook a trip to Asia with a friend, the English composer Clement Harris. During the voyage he decided to abandon architecture and commit himself to music. Reputedly, it was also Harris who first aroused his homoerotic impulses.

While on board ship he sketched his first official work, the symphonic poem Sehnsucht, inspired by the poem of the same name by Friedrich Schiller. This piece was not completed until just before the concert in which Wagner conducted it in London on 06-06-1895. He composed more operas than his father. Though his works are numerous, none entered the standard repertory.

He made his conducting debut as an assistant conductor at Bayreuth in 1894; in 1896 he became associate conductor, sharing responsibility for conducting the Ring Cycle with Felix Mottl (1856-1911) and Hans Richter (1843-1916), who had conducted its premiere 20 years earlier. In 1908 he took over as Artistic Director of the Bayreuth Festival in succession to his mother, Cosima Wagner (1837-1930).

Wagner was bisexual. For years, his mother urged him to marry and provide the Wagner dynasty with heirs, but he fought off her increasingly desperate urgings.

Around 1913, pressure on him increased due to the Harden-Eulenburg Affair (1907-1909), in which the journalist Maximilian Harden accused several public figures, most notably Philipp, Prince of Eulenburg-Hertefeld, a friend of Kaiser Wilhelm II, of homosexuality. In this climate, the family found it suitable to arrange a marriage with a 17-year-old Englishwoman, Winifred Klindworth, and at the Bayreuth festival of 1914 she was introduced to the then-45-year-old Wagner. The two married on 22-09-1915.

The couple had four children:

Though the marriage provided for the dynastic succession, the hope that it would also bring an end to his homosexual encounters and the associated costly scandals was disappointed, as Wagner remained sexually active with other men.

Peter Pachl, one of Siegfried’s biographers, asserted that in 1901 Siegfried had sired an illegitimate son, Walter Aign (1901-1977). However, that assertion remains controversial, as he supplied no evidence. Nonetheless, several recent authors, such as Frederic Spotts and Brigitte Hamann, have taken it up.

Wagner died in Bayreuth in 1930, having outlived his mother by only four months. Since his two sons were still only adolescents, he was succeeded at the helm of the festival by his wife Winifred.