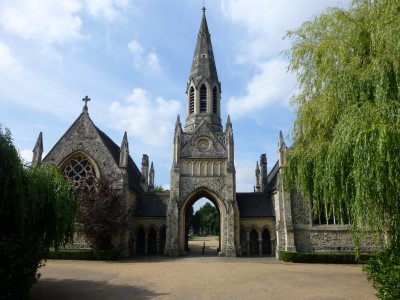 Hampstead Cemetery was opened in 1876. There are two Gothic-style chapels, which are listed buildings, and an entry lodge made of Kentish Rag and Bath stone. There has been some major work to these buildings under a scheme funded by the Heritage Lottery, as well as road improvements and new landscaping. It is situated on the far western edge of the borough, between Cricklewood and West Hampstead. It is still used for burials, although most of the available space has now been taken.

By the latter half of the 19th century, additional burial space had become an urgent requirement in Hampstead, as the small extension to St John’s Churchyard was no longer adequate for the interment of its citizens. As the nearest local authority cemetery was beyond Kilburn at Paddington Cemetery, and the commercial cemeteries at Highgate and Kensal Green could only be used by those who could afford them, it was decided that Hampstead required a new cemetery of its own. A twenty acre site adjoining Fortune Green was therefore purchased for £7000 in 1875, and the Bishop of London consecrated part of this in the following year; the central avenue divides consecrated from unconsecrated ground, with the latter providing burial space for Dissenters.

An interesting feature of the area to the south-west of the chapel is the large number of Celtic crosses, marking the resting places of the many Scottish families buried here. In contrast, the north-eastern corner has some very good examples of more modern stonemasonry, in particular the Bianchi monument – an ornate Art-Deco angel commemorating the opera singer wife of an Italian restaurateur – and the sculpted church organ in memory of Charles Barritt. Hampstead Cemetery covers 26 acres, and has a main drive and public footpath running through it from Fortune Green to Cricklewood.