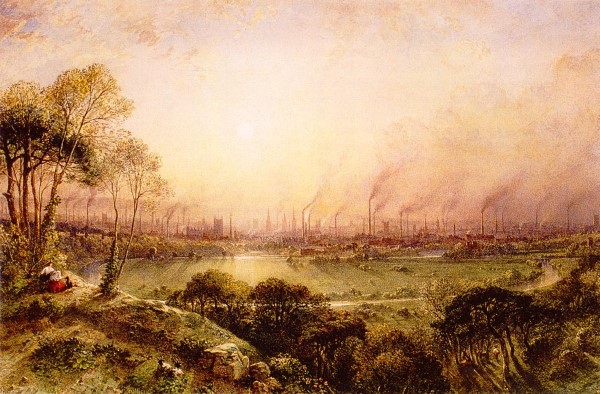 Manchester’s history is concerned with textile manufacture during the Industrial Revolution. The great majority of cotton spinning took place in the towns of south Lancashire and north Cheshire, and Manchester was for a time the most productive centre of cotton processing, and later the world’s largest marketplace for cotton goods. Manchester was dubbed “Cottonopolis” and “Warehouse City” during the Victorian era. In Australia, New Zealand and South Africa, the term “manchester” is still used for household linen: sheets, pillow cases, towels, etc. The industrial revolution brought about huge change in Manchester and was key to the increase in Manchester’s population.

Manchester began expanding “at an astonishing rate” around the turn of the 19th century as people flocked to the city for work from Scotland, Wales, Ireland and other areas of England as part of a process of unplanned urbanisation brought on by the Industrial Revolution.It developed a wide range of industries, so that by 1835 “Manchester was without challenge the first and greatest industrial city in the world.” Engineering firms initially made machines for the cotton trade, but diversified into general manufacture. Similarly, the chemical industry started by producing bleaches and dyes, but expanded into other areas. Commerce was supported by financial service industries such as banking and insurance.

1857. Manchester from Kersal Moor, by William Wyld in 1857, a view now dominated by chimney stacks as a consequence of the Industrial Revolution.

Trade, and feeding the growing population, required a large transport and distribution infrastructure: the canal system was extended, and Manchester became one end of the world’s first intercity passenger railway—the Liverpool and Manchester Railway. Competition between the various forms of transport kept costs down. In 1878 the GPO (the forerunner of British Telecom) provided its first telephones to a firm in Manchester.

The Manchester Ship Canal was built between 1888 and 1894, in some sections by canalisation of the Rivers Irwell and Mersey, running 36 miles (58 km) from Salford to Eastham Locks on the tidal Mersey. This enabled oceangoing ships to sail right into the Port of Manchester. On the canal’s banks, just outside the borough, the world’s first industrial estate was created at Trafford Park. Large quantities of machinery, including cotton processing plant, were exported around the world.

A centre of capitalism, Manchester was once the scene of bread and labour riots, as well as calls for greater political recognition by the city’s working and non-titled classes. One such gathering ended with the Peterloo Massacre of 16 August 1819. The economic school of Manchester capitalism developed there, and Manchester was the centre of the Anti-Corn Law League from 1838 onward.

Manchester has a notable place in the history of Marxism and left-wing politics; being the subject of Friedrich Engels’ work The Condition of the Working Class in England in 1844; Engels spent much of his life in and around Manchester, and when Karl Marx visited Manchester, they met at Chetham’s Library. The economics books Marx was reading at the time can be seen in the library, as can the window seat where Marx and Engels would meet. The first Trades Union Congress was held in Manchester (at the Mechanics’ Institute, David Street), from 2 to 6 June 1868. Manchester was an important cradle of the Labour Party and the Suffragette Movement.

At that time, it seemed a place in which anything could happen—new industrial processes, new ways of thinking (the Manchester School, promoting free trade and laissez-faire), new classes or groups in society, new religious sects, and new forms of labour organisation. It attracted educated visitors from all parts of Britain and Europe. A saying capturing this sense of innovation survives today: “What Manchester does today, the rest of the world does tomorrow.” Manchester’s golden age was perhaps the last quarter of the 19th century. Many of the great public buildings (including Manchester Town Hall) date from then. The city’s cosmopolitan atmosphere contributed to a vibrant culture, which included the Hallé Orchestra. In 1889, when county councils were created in England, the municipal borough became a county borough with even greater autonomy.

Although the Industrial Revolution brought wealth to the city, it also brought poverty and squalor to a large part of the population. Historian Simon Schama noted that “Manchester was the very best and the very worst taken to terrifying extremes, a new kind of city in the world; the chimneys of industrial suburbs greeting you with columns of smoke”. An American visitor taken to Manchester’s blackspots saw “wretched, defrauded, oppressed, crushed human nature, lying and bleeding fragments”.

The number of cotton mills in Manchester itself reached a peak of 108 in 1853. Thereafter the number began to decline and Manchester was surpassed as the largest centre of cotton spinning by Bolton in the 1850s and Oldham in the 1860s. However, this period of decline coincided with the rise of the city as the financial centre of the region. Manchester continued to process cotton, and in 1913, 65% of the world’s cotton was processed in the area. The First World War interrupted access to the export markets. Cotton processing in other parts of the world increased, often on machines produced in Manchester. Manchester suffered greatly from the Great Depression and the underlying structural changes that began to supplant the old industries, including textile manufacture.