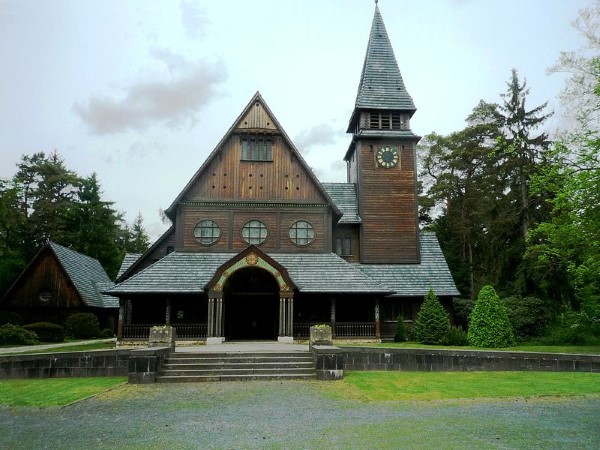 The dramatic growth of the Berlin population made the Berlin City Synod Association already at the end of the 19th century think of establishing central cemeteries at the gates of the city, which could be connected with the city by using “modern means of transport”. For this purpose, estates were bought in Stahnsdorf, Ahrensfelde and Mühlenbeck around the turn of the century. New conceptions were developed in order to try to economically and culturally cope with the burial problem of the city and the bordering conurbation in the long term.

On the three large cemeteries planned each parish was to be provided with its own burial place. They were intended to be incorporated into the huge structure, which in itself had to be economically manageable and recognizable. On 28th March 1909 the South-Western Cemetery was officially opened. In order to create favourable transport links, the suburban railway connection to Stahnsdorf with a separate cemetery station was built at the expense of the Protestant Church.

Due to its size and its spacious park-like and forest-like design the South-Western Cemetery developed into one of the most famous and biggest burial places in Germany during the first decades since its opening. Numerous personalities found their last resting place here, among others, Heinrich Zille, Rudolf Breitscheid, Lovis Corinth, Edmund Rumpler, Louis Ullstein, as well as the Siemens family.

The overall impression of the cemetery is decisively determined by the unity of garden and cemetery art, architecture and sculptures. The architects and artists Franz Seeck, Alfred Grenander, Max Taut, Hugo Lederer, Hermann Hosaeus and Emil Cauer worked here, to mention only some of them.

Apart from the gravestone art of the 19th and 20th century, the mourning chapel in the style of Norwegian stave churches is the central building of the South-Western Cemetery. The royal building surveyor Gustav Werner got his inspiration in Scandinavia and put the building plans for the chapel into effect between 1908 and 1911.

This made the cemetery famous and popular as a cultural monument far beyond the boundaries of Berlin. Until now the Stahnsdorf South-Western Cemetery is of national importance in terms of culture and history of art.

Especially important for the history of the city of Berlin is the reburial of 30,000 deceased including the transfer of the respective graves with mural monuments and mausoleums to Stahnsdorf in connection with the construction of the so-called “North-South axis” in the course of the reconstruction of the city by Albert Speer at the end of the 1930-ies.

Due to the political separations and the construction of the wall in 1961 the cemetery lost its original function as a central cemetery after it had been cut off from its original catchment area. Infrastructure, rising structures and monuments were in rapid decline, large parts of the former garden layout can only be guessed at because of overgrowing.

To maintain and preserve this cemetery, which has been listed for preservation for more than 20 years, not only as a garden monument, but also as a testimony of former cemetery culture, has always been a matter of concern of the Protestant Church, also under the difficult conditions of the immediate post-war period, the political division of Germany and Berlin.

Since 1991 the Protestant Church of Berlin-Brandenburg-schlesische Oberlausitz has invested more than 6 million Euro in the rehabilitation of cemetery area, building and facilities.

The large number of visitors is reflecting the great interest in the specific cultural-historical and art-historical features of the park. Since January 2000 the Stahnsdorf South-Western Cemetery Support Association inc. has given its support to the protection of the historical monument and thus the preservation of the cultural monument.

Today, the Stahnsdorf South-Western Cemetery is not only looked after as a place of burial and mourning. It increasingly gains importance as living space and place of meeting.