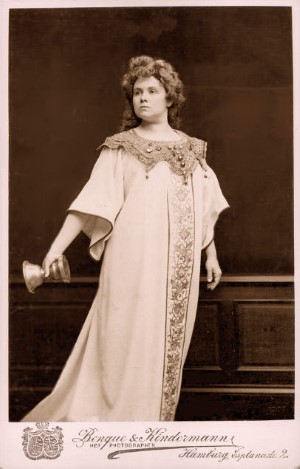 She was the daughter of the famous Viennese architect Heinrich Claus. After her education at the Conservatory of Vienna by Johannes Ress and August Stoll (1853-1918) she made her debut in 1891 at the court theater of Mannheim as Elisabeth in »Tannhäuser«. From 1891-93 she was engaged at the Stadttheater (opera house) of Hamburg. After performing at the Deutsches Theater in Prague from 1896 to 1899, she sang at the Hofoper in Munich from 1899-1900, but returned to the Deutsches Theater in Prague for the years 1900-1903, where in 1903 she premiered the opera »Nadeya «By Cesare Rossi.

In 1903-06 she was back in Hamburg in engagement, 1906-07 at the Court Theater Karlsruhe, 1909-10 at the City Theater of Bremen. Throughout her career she gave guest appearances, ia. 1899 and 1900 at the Vienna Court Opera (where she caused a sensation as Isolde), 1900 at the Court Theater in Wiesbaden, 1904 at the Wagner Festival in Munich (where she was already Isolde in Tristan 1897-98 and Donna Anna in Don Giovanni “), in 1907 at the Municipal Theater of Nuremberg, 1908 in Hamburg and in the years 1906-10 regularly at the Deutsches Theater in Prague. As early as 1901 she appeared as Isolde at the London Covent Garden Opera, as Ortrud in Lohengrin, and as Brünnhilde in Siegfried. Since 1910 she worked as a teacher at the New Music Institute in Berlin, where she still lived in 1941.

Her big stage performances were the Ortrud in Lohengrin, the Brünnhilde in the Nibelungenring, Senta in the Flying Dutchman, Leonore in Fidelio, the title roles in Donizetti’s Lucrezia Borgia, and in Goldmark’s Queen of Saba especially the Isolde. Since 1899 she was married to the baritone Ludwig Fränkel (24-02-1863 Odessa), who worked at the Berlin Court Opera in 1891-97 and since 1899 at the Deutsches Theater in Prague, and later became a teacher at the drama school of the German Theater in Berlin.