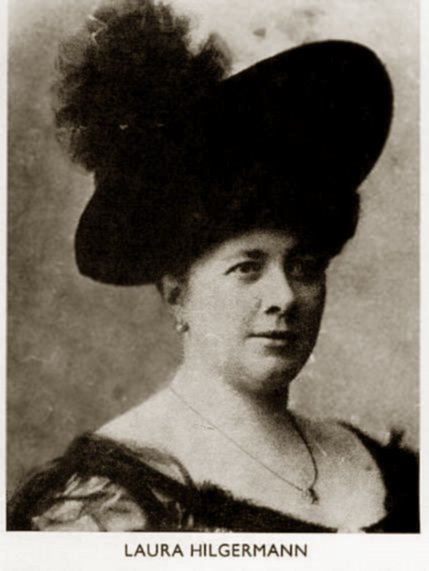 Her mother’s maiden name was Katharina Oberländer. Her father’s name was Josef August Hilgermann, he was a school and piano teacher. He died ca. 1895 in Vienna.

Nineteen years old Laura Hilgermann made her first stage appearance in Prague on 03-08-1885 in Rossini’s ‘WilhelmTell’ (as Hedwig), conducted by Ludwig Slansky (1833-1905), and four days later as Azucena in ‘Il Trovatore’, conducted by Anton Seidl (1850-1898). During her first season in Prague she appeared in 21 different parts in 101 performances, of which 58 were conducted by Mahler. During her four seasons in Prague she appeared in a total of 294 performances of 55 different operas and operettas (incl. plays by Byron and Shakespeare with incidental music by Schumann and Mendelssohn).

In the autumn of 1887 she met the relatively unknown Hungarian actor Siegfried Rosenberg who had just joined the German Royal Landestheater in Prague as a member. She married him in November 1889 and they had two children, a girl and a boy, born 1894 and 1897 respectively. Of unknown reasons Rosenberg changed his surname around 1896 to Radó, and from 3 May 1896 Laura Hilgermann also appeared as Laura Radó-Hilgermann.

She left Prague on 15 June 1889, and was subsequently accused (unjustly) by director Angelo Neumann for breach of contract. Only in October 1892 she was finally acquitted by the high court in Budapest. Mahler engaged her in February 1890 at the Royal Opera in Budapest, where she remained for a decade. During her ten years in Budapest she appeared in 30 parts in around 380 performances, all sung in Hungarian. She premiered operas by Jenö Hubay, Ferenc Erkel (1810-1893), Franz Doppler, Graf Geza Vasony-Teo von Zichy (1849-1924) and Franz Lehar (1870-1948).

On 01-03-1900 she was appointed by Gustav Mahler (1860-1911) at the Vienna Court Opera, and remained there until 1920. During a short intermezzo, from March to June 1902, while negotiating a new contract, she appeared 40 times as a ‘guest singer’. In Vienna the singer, whose repertoire included both alto and soprano parts, enjoyed great popularity. In 1920 she was made an honorary member of the Vienna State Opera.

On 24-11-1905 she sang in a memorable new production of ‘Così fan tutte’ under Gustav Mahler in Vienna as Dorabella. Her very multifaceted repertoire included among others the Sieglinde in the ‘Die Walküre’, the Mignon, Carmen, Amneris in ‘Aida’, Cherubino, the Countess, in ‘The Marriage of Figaro’, Idamante in ‘Idomeneo’ and Orpheus by Gluck, but also in many contemporary operas by Janacek, Rich. Strauss, Josef Forster, Franz Schreker (1878-1934), Bittner and Korngold.

After having retired from the stage she became a sought vocal teacher in Vienna and Budapest and from 1920-1936 she was appointed professor at the Franz Liszt Academy of Music. Among her students were Maria Nemeth, Gitta Alpar, Enid Szantho and Mary Ilosvay. She died during the Russian siege of Budapest in the basement of her destroyed house.