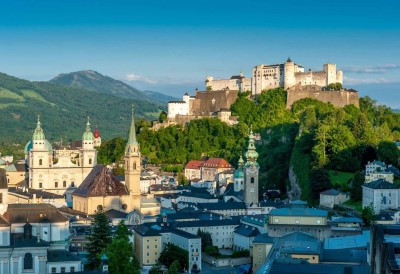 Salzburg’s “Old Town” (Altstadt) is internationally renowned for its baroque architecture and is one of the best-preserved city centers north of the Alps. Salzburg was the birthplace of 18th-century composer Wolfgang Amadeus Mozart. Near City of Bad Reichenhall, City of Berchtesgaden, City of Heiligenblut.

At the Congress of Vienna in 1815, it was definitively returned to Austria, but without Rupertigau and Berchtesgaden, which remained with Bavaria. Salzburg was integrated into the Salzach province and Salzburgerland was ruled from Linz. In 1850, Salzburg’s status was once more restored as the capital of the Duchy of Salzburg, a crownland of the Austrian Empire. The city became part of Austria-Hungary in 1866 as the capital of a crownland into the Austrian Empire. The nostalgia of the Romantic Era led to increased tourism. In 1892, a funicular was installed to facilitate tourism to the fortress of Hohensalzburg.