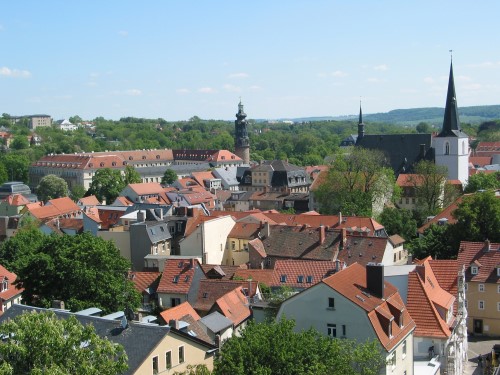 Weimar is a city in the federal state of Thuringia, Germany. It is located between Erfurt in the west and Jena in the east, approximately 80 kilometres (50 miles) southwest of Leipzig, 170 kilometres (106 miles) north of Nuremberg and 170 kilometres (106 miles) west of Dresden. Together with the neighbour-cities Erfurt and Jena it forms the central metropolitan area of Thuringia with approximately 500,000 inhabitants, whereas the city itself counts a population of 65,000. Weimar is well known because of its large cultural heritage and its importance in German history.

The city was a focal point of the German Enlightenment and home of the leading characters of the literary genre of Weimar Classicism, the writers Johann Wolfgang von Goethe (1749-1832) and Johann Christoph Friedrich von Schiller (1759-1805). In the 19th century, famous composers like Franz Liszt made a music centre of Weimar and later, artists and architects like Henry van de Velde (1863-1957), Wassily Kandinsky, Paul Klee, Lyonel Feininger and Walter Gropius (1883-1969) came to the city and founded the Bauhaus movement, the most important German design school of the interwar period. However, the political history of 20th-century Weimar was inconsistent: it was the place where Germany’s first democratic constitution was signed after the First World War, giving its name to the Weimar Republic period in German politics (1918–1933), as well as one of the cities mythologized by the National Socialist propaganda.

The time after Goethe’s death is denoted as the “silver” age because Weimar remained an influential cultural centre. The first emphasis was fostering music. In 1842, Franz Liszt (1811-1886) moved to Weimar as court conductor. He organized the premiere of Richard Wagner (1813-1883)‘s Lohengrin (1850) in the city. The Weimar School of Music was founded in 1872 as Germany’s first orchestra school. Richard Strauss (1864-1949) worked in Weimar between 1889 and 1894 as second conductor in the acclaimed Staatskapelle Weimar (the court orchestra founded in 1491). Several of his encores for works such as Hansel and Gretel, Don Juan and Macbeth were performed by the Staatskapelle Weimar. In 1897, Friedrich Nietzsche (1844-1900) moved to Weimar and died here in 1900 (see House Nietzsche).

In 1860 the Weimar Saxon – Grand Ducal Art School (Bauhaus University), was founded. This was the beginning of academic arts education in Weimar. The institution created its own painting style, the “Weimar School” of painting with representatives such as Max Liebermann and Arnold Böcklin. The Kunstgewerbeschule Weimar was found by Henry van de Velde (1863-1957) with the support of Grand Duke William Ernest in 1902 and represents the other root of the Bauhaus, known as “Das Neue Weimar” (“The New Weimar”) around Harry Graf Kessler. It was a foundation against Prussia’s restrictive arts policy favouring Historicism instead of international Arts and Crafts and Art Nouveau.

Already in the 19th century, the curation of Weimar and its heritage started. Many archives, societies and museums were found to present and conserve the cultural sights and goods. In 1846, Weimar was connected by the Thuringian Railway. In the following decades, the city saw a construction and population boom (like most late-19th-century cities in Germany). Nevertheless, Weimar did not become industrialised, and remained a city of clerks, artists and rentiers. During the German Revolution of 1918-1919 the last reigning grand duke of Saxe-Weimar-Eisenach, William Ernest, had to abdicate and went in exile to Heinrichau in Silesia.

School of Arts and Crafts