Franz Schalk was an Austrian conductor. From 1918 to 1929 he was director of the Vienna State Opera, a post he held jointly with Richard Strauss from 1919 to 1924. He was later involved in the establishment of the Salzburg Festival. Born in Vienna, he studied under composer Anton Bruckner. From 1900, he was first kapellmeister of the Vienna Court Opera (Hofoper). Between 1904 and 1921, he was head of the Gesellschaft der Musikfreunde in Vienna. 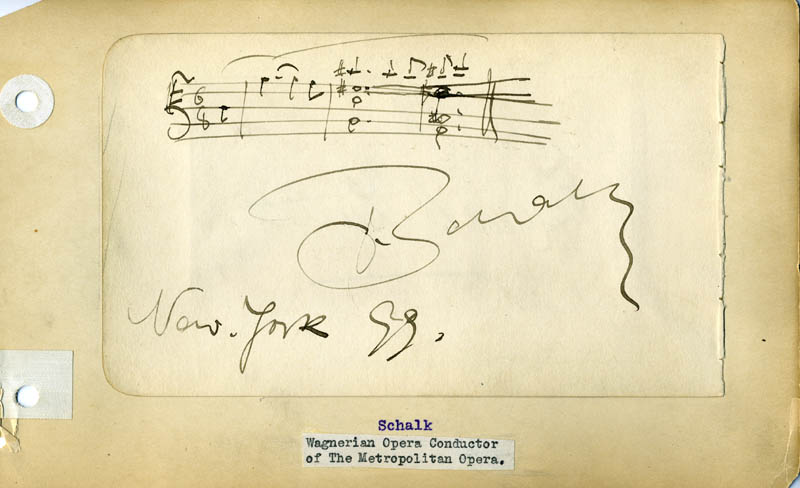 In 1918 he became director of the Vienna State Opera, but from 1919 shared the directorship with Richard Strauss (1864-1949), with the well-known composer considered “blatantly (though unofficially) the ‘greater equal’ of the pair” (despite Schalk’s recorded renditions of the Beethoven and Schubert 8th Symphonies virtually as distinguished as Strauss’ versions of the last three Mozart symphonies, Beethoven’s 5th & 7th, and some of the best-known German overtures). Tensions resulting from unclear division of responsibility between the two men eventually led to Strauss’s resignation.

Schalk’s most famous quote is “Every theatre is an insane asylum, but an opera theatre is the ward for the incurables.”Today, he is best known for his association with Anton Bruckner (1824-1896). He gave the premiere of Bruckner’s Symphony No. 5 in 1894, but with numerous cuts and alterations thought by most authorities to have been made without Bruckner’s approval. (The composer was too ill to attend the premiere.)

Schalk’s version of the Fifth Symphony was the one chosen for first publication, and was the only version heard by audiences for almost forty years. While many critics have attacked him for his alterations of the original versions of many of Bruckner’s most important symphonies, others credit him for popularizing great works which might otherwise have remained unknown. Present-day conductor Leon Botstein is a prominent advocate of Schalk’s versions of Bruckner’s music, as was Hans Knappertsbusch. 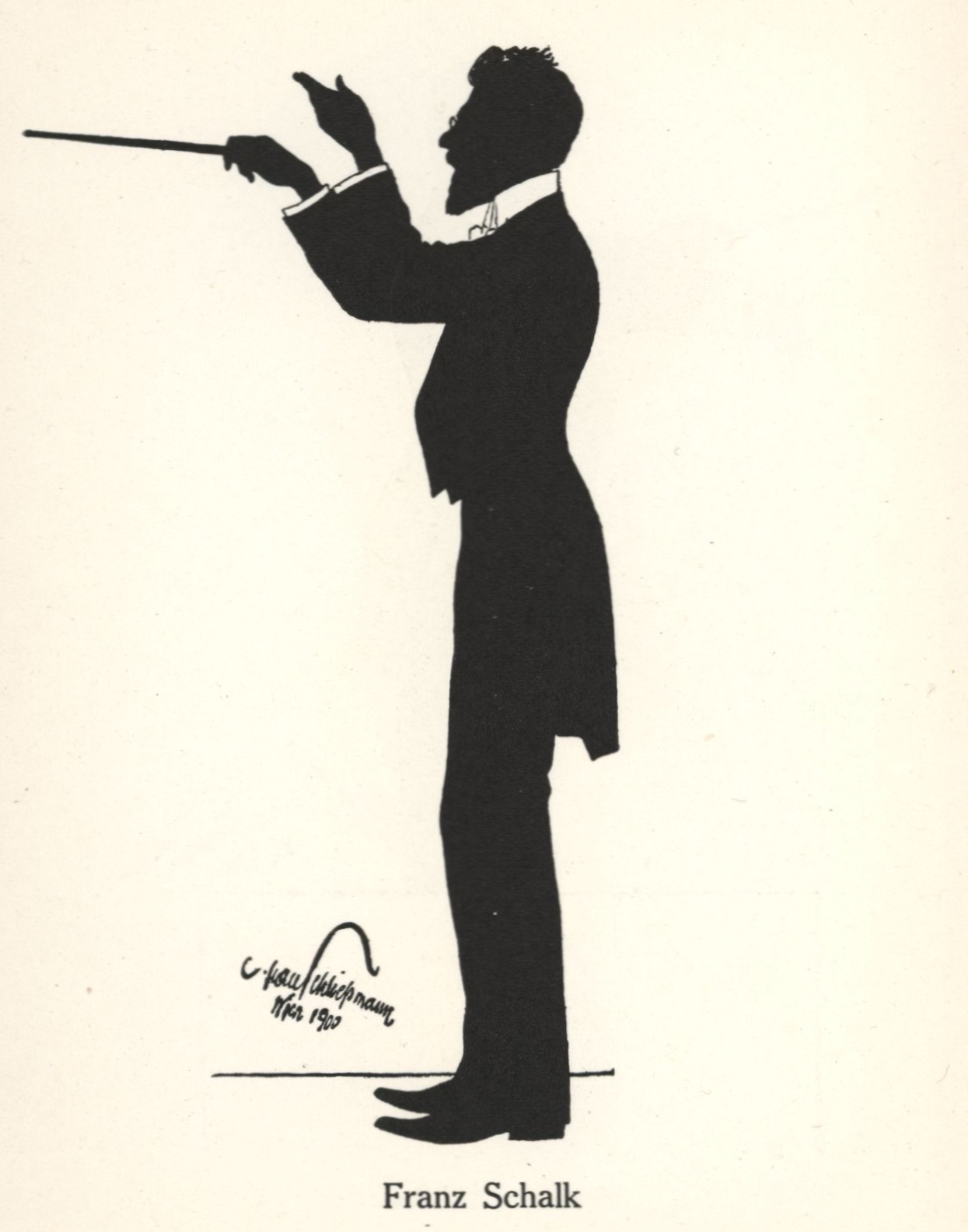 Schalk was also involved in the early publication of Mahler’s Symphony No. 10. Schalk gave the premiere of Richard Strauss’s opera Die Frau ohne Schatten in 1919. He died in 1931, aged 68. Some of his work as a conductor has been preserved and is available on CD. Schalk’s elder brother Joseph was also a prominent conductor and musician. 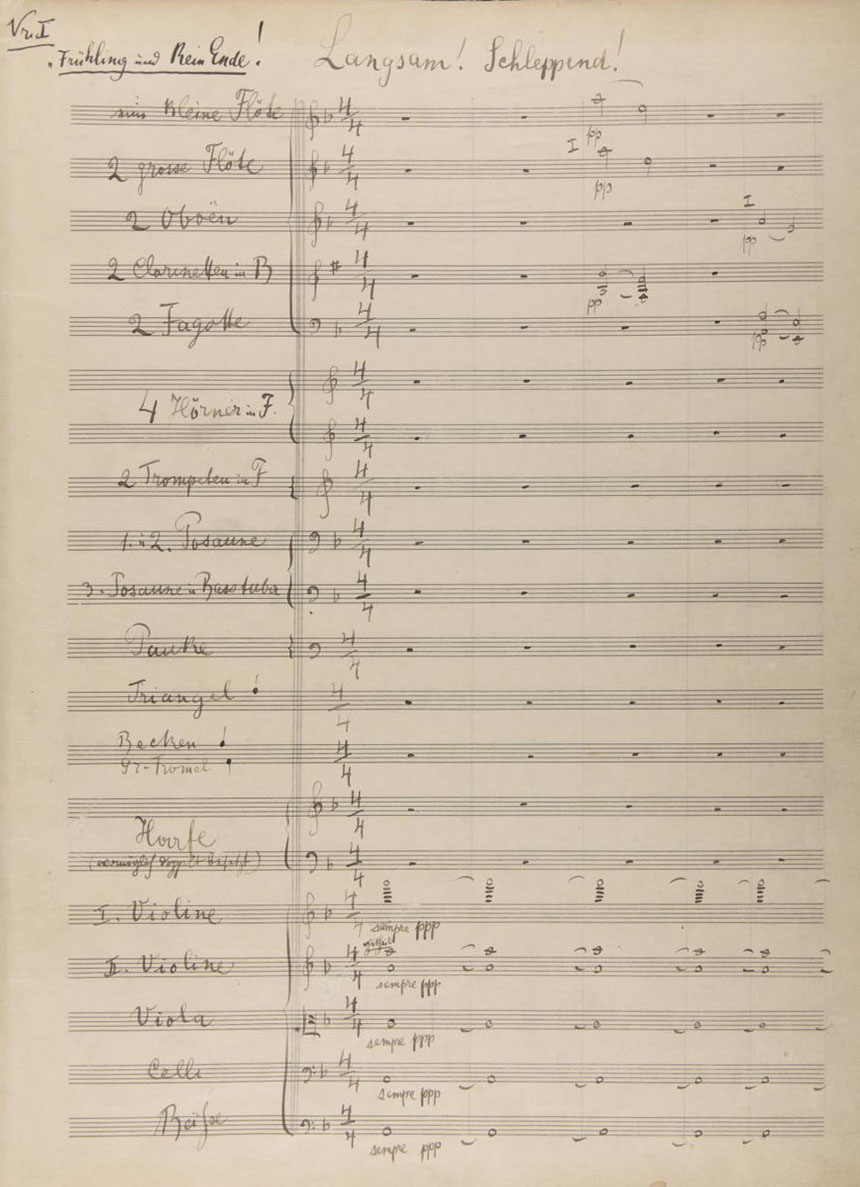 As Gustav Mahler wrote to his colleague Franz Schalk, “The introduction to the first movement sounds of nature, not music!” (Symphony No. 1). 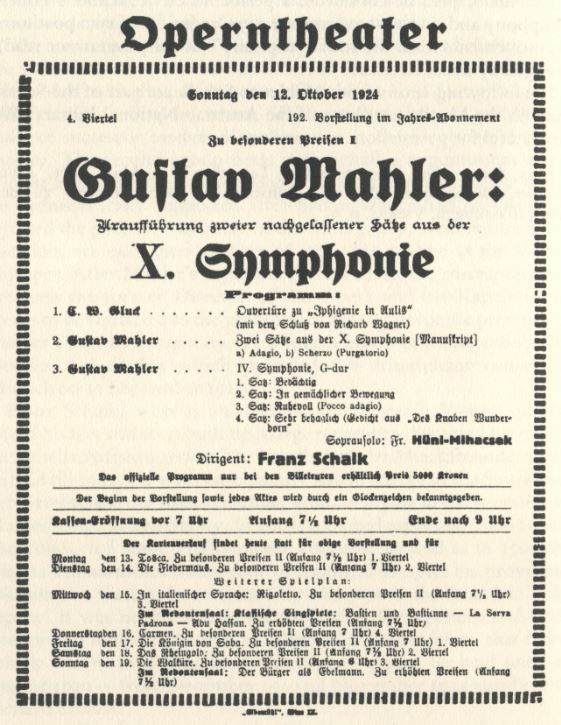 Franz Schalk is best known for his association with the Vienna Opera. He actually studied with Anton Bruckner! His association with Lotte Lehmann was profound. Schalk gave Vienna the local première of Pfitzner’s Palestrina, with Lehmann was cast as Silla and Die Frau ohne Schatten by R. Strauss, with Lehmann as the Dyer’s Wife.  Especially for Lehmann, Schalk revived the title of Kammersängerin (literally “Chamber Singer,” from the days of the monarchy when singers were honored by the appointment to sing for the emperor in his chamber, a sign of his highest esteem).

She was the first singer to receive that designation since the collapse of the monarchy. She officially became Frau Kammersängerin Lotte Lehmann on 17-02-1926.  For the Beethoven Centennial in 1927 Schalk conducted as Lehmann sang her first Leonores. He wrote: “A great, overwhelming, radiant festival, and our Lotte Lehmann was its brilliant center.” These few roles are only a sample of how much Schalk conducted Lehmann. The chronology demonstrates far better.

An Ariadne auf Naxos in Vienna in June 1931 turned out to be the last performance that she sang with her beloved Schalk, who was failing fast ever since he lost the directorship of the Vienna Opera. He died on September 3, 1931, and Lotte walked behind his coffin to the cemetery. That evening, at the opera house, Clemens Krauss conducted Siegfried’s Funeral March before a memorial performance of Die Meistersinger. Lotte was the Eva. She recalls how deeply she was moved, in Midway in my Song: ‘In the last act the chorus, “Awake!” [“Wach’ auf!“], recalled to my mind the familiar figure at the desk…. I closed my eyes, and it was as if he were there again—surrendered to the waves of music: “Awake! The dawn of day draws near….” An uncontrollable fit of weeping shook me, and my colleagues quickly formed a protecting wall round me so that no one might see my tears…. ‘

On 08-12-1931, there was a special concert in memory of Schalk. Two great orchestras, the chorus of the Vienna Opera, and many leading soloists were involved. Bruno Walter (1876-1962) conducted and Lehmann sang Gustav Mahler’s Lied Ruckert 3: Um Mitternacht.