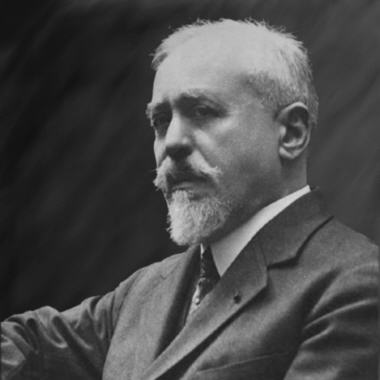 Paul Abraham Dukas was a French composer, critic, scholar and teacher. A studious man, of retiring personality, he was intensely self-critical, and he abandoned and destroyed many of his compositions. His best known work is the orchestral piece The Sorcerer’s Apprentice (L’apprenti sorcier), the fame of which has eclipsed that of his other surviving works. Among these are the opera Ariane et Barbe-bleue, a symphony, two substantial works for solo piano, and a ballet, La Péri.

At a time when French musicians were divided into conservative and progressive factions, Dukas adhered to neither but retained the admiration of both. His compositions were influenced by composers including Beethoven, Berlioz, Franck, d’Indy and Debussy.

In tandem with his composing career, Dukas worked as a music critic, contributing regular reviews to at least five French journals. Later in his life he was appointed professor of composition at the Conservatoire de Paris and the École Normale de Musique; his pupils included Maurice Duruflé, Olivier Messiaen, Manuel Ponce, and Joaquín Rodrigo.

Paul Abraham Dukas (1865-1935) and students of his composition class at the Paris Conservatoire. Olivier Messiaen is on the extreme right. Maurice Duruflé stands next to him, 1929.

His witty orchestral scherzo “The Sorcerer’s Apprentice” (1897) is one of the most popular pieces of concert music ever written. It has been recorded many times and served as the centerpiece for Walt Disney’s “Fantasia” (1940), with Mickey Mouse appearing as the apprentice. Dukas’ other major works were more heavily influenced by Impressionism. They are the Symphony in C Major (1897), the opera “Ariane et Barbe-bleue” (1907) and the ballet “La Peri” (1912).

Dukas was born in Paris. He studied at the Paris Conservatory from 1882 to 1890 and was a professor there from 1910 until his death. A painstaking, self-critical composer, Dukas published very little and destroyed most of what he wrote after 1912. In 1935 he was elected to France’s Academy of Fine Arts.

Ariane et Barbe-bleue (Ariadne and Bluebeard) is an opera in three acts by Paul Dukas. The French libretto is adapted (with very few changes) from the symbolist play of the same name by Maurice Maeterlinck, itself loosely based on the French literary tale La Barbe bleue by Charles Perrault.

Dukas had been impressed by Maeterlinck’s play when it was first published in 1899. Maeterlinck had initially reserved the rights to use Ariane as a libretto for Edvard Grieg (1843-1907). When Grieg abandoned his plans to compose the opera, Maeterlinck offered it to Dukas instead. Dukas worked on the score between 1899 and 1906.

The work has often been compared to Debussy’s opera Pelléas et Mélisande (1902), also based on a Maeterlinck play; Debussy had virtually finished his score by the time Dukas began work on his. The names of Barbe-bleue’s five former wives are taken from previous plays by Maeterlinck: Sélysette from Aglavaine et Sélysette (1896), Alladine from Alladine et Palomides (1894), Ygraine and Bellangère from La mort de Tintagiles (1894), and Mélisande from Pelléas et Mélisande.

Dukas, who knew Claude Debussy (1862-1918) well, actually borrowed three bars from Debussy’s opera to accompany the first mention of Mélisande, although the character is minor in Dukas’ opera. Ariane takes her name from the legend of Ariadne and the Cretan labyrinth, although she combines the roles of both Ariadne and Theseus, who freed the captive Athenian virgins from the Minotaur just as Ariane liberates (or tries to liberate) the wives from Bluebeard.

Ariane et Barbe-bleue premiered at Opera Comique in Paris on 10-05-1907 with Maeterlinck’s partner, Georgette Leblanc, in the title role.

Performances in the latter half of the twentieth century were rare.